Paul Ryneveld, general manager of the Century Downs track near Calgary, said construction is expected to start this spring with an opening in late summer 2018. He said the location adjacent to Edmonton International Airport is ideal. “The accessibility and the infrastructure there is

The first level of supplementation includes an energy-dense concentrate mix that is fed to meet the horse’s energy requirement.

Many pleasure horses can easily survive and prosper off hay alone. Elite athletic horses, however, need their diets customized to meet their specific dietary requirements, as hay alone often does not provide enough energy (calories).

“As with all types of horse, forage is the foundation of a performance horse’s feeding program,” said Joe Pagan, PhD, president of Kentucky Equine Research in Versailles, Ky. Pagan was scheduled to present at the 12th Congress of The World Equine Veterinary Association, held Nov. 2-6, 2011, in Hyderabad, India, however a last-minute change prevented him from attending. TheHorse.com caught up with him after the fact to discuss supplementing performance horse diets.

“Typically, performance horses require about 1.5% of their body weight per day as good quality grass or grass-legume mixed hay,” he said. “This quantity of forage will promote digestive tract health, but most likely will not meet the performance horse’s energy requirement.”

Thus, his energy requirements will need to be supplemented. But with the myriad of supplements that tantalize trainers and owners alike, how exactly does one avoid unnecessary supplements and only purchase what is really needed?

“An effective supplementation strategy for performance horses hinges around understanding what is missing from the primary constituents of a ration,” advised Pagan.

What is the remaining 10% of a performance horse’s ration?

Pagan said every high performance horse that produces copious amounts of sweat needs a supplemental source of electrolytes such as a free choice salt block or a commercial electrolyte containing sodium, chloride, potassium, magnesium, and calcium.

Other supplements for specific needs could be required, he noted. Popular supplements in this category include joint supplements that generally contain glucosamine, chondroitin sulfate, and methylsulfonylmethane (commonly known as MSM), or high molecular weight hyaluronic acid.

Newer classes of supplements address gastrointestinal health and include protected buffers to reduce hindgut acidosis, antacids, and coating agents to reduce the severity of gastric ulceration. Finally, supplements that address hoof and skin problems, which usually contain biotin as well as various other keratin-promoting ingredients such as zinc and methionine, are also extremely popular. (For more on the efficacy and science behind nutraceuticals, take a look at The Science Behind Equine Nutritional Supplements.)

While forage should remain the basis of the equine diet, performance horses typically need additional supplementation to meet their increased energy requirements, Pagan suggested. To ensure a horse is receiving adequate but not excessive supplementation, consult a veterinarian or equine nutritionist.

Stacey Oke, MSc, DVM, is a practicing veterinarian and freelance medical writer and editor. She is interested in both large and small animals, as well as complementary and alternative medicine. Since 2005, she’s worked as a research consultant for nutritional supplement companies, assisted physicians and veterinarians in publishing research articles and textbooks, and written for a number of educational magazines and websites.

It’s important to know the pros and cons of the hays you have available as they relate to the specific horse you’re feeding.

Q. I just bought a yearling and will be bringing him home shortly. What are your thoughts on feeding different types of hay such as three-grain (oat, wheat, and barley) versus alfalfa and grass hay? Is there anything else I should keep in mind when choosing hay for my yearling?

A. Congratulations on your new horse! I like being able to feed different types of hay, because they all bring different qualities to the ration. Different forages also offer variety, something that would be abundant in the horse’s natural diet but can be lacking in a lot of diets we create. That said, it’s important to know the pros and cons of the hays you have available as they relate to the specific horse you’re feeding. Yearlings are still growing, and this increases the demand for several nutrients, particularly protein, calcium, and phosphorus.

Despite having reached about 60% of their final mature weight, yearlings’ daily calorie requirements are marginally higher than if they’d reached their mature weights and were doing no work. For example, per the guidelines in the National Research Council’s (NRC) Nutrient Requirements of Horses (2007), an average mature horse with a body weight of 500 kilograms (1,100 pounds) requires 16.7 Mcal of digestible energy (DE) each day if not working. This increases to 20 Mcal of DE a day once in light work. That same horse aged 12 months has an estimated body weight of 321 kilograms (706 pounds) and requires 18.8 Mcal of DE a day. It’s not hard to meet these energy requirements if feeding good quality hay or if you have access to quality pasture.

However, forage calorie content decreases with maturity, so a late-cut hay will typically provide fewer calories per pound than one cut earlier, and this can impact ability to meet requirements. While this might be benefit easy-keeper adult horses, for growing yearlings a less mature, less stemmy hay is preferred. If you have access to a hay analysis look for excellent quality hay with an acid detergent fiber (ADF is a measure of the least digestible fibrous portion of plants) content of less than about 32% on a dry matter basis.

As maturity and ADF content increase, protein content decreases and might also be less available if trapped within indigestible carbohydrate fractions. This can pose more of a problem for a yearling than reduced calorie intake. Again using the example above, this yearling would need 846 grams of crude protein and 36.4 grams of lysine (an essential amino acid). This compares to a 500-kilogram mature horse in heavy work.

Alfalfa, with its high crude protein content, becomes attractive in this situation. However in some parts of the country, such as California, the calcium content of alfalfa hay is very high and sometimes six times higher than the phosphorus. Ideally calcium should be one-and-a-half to two times higher than phosphorus in the total ration. Mature horses are better able to handle high ratios than young growing horses, so feeding straight alfalfa is not the best choice even though it would clearly solve the protein issue.

Grain hays aren’t only typically lower in protein, they might have inverted calcium-to-phosphorus ratios, meaning the amount of phosphorus provided is sometimes greater than the amount of calcium. If they made up the entre ration, this would be more detrimental to bone health than overly high calcium. I’ve seen this same inverted calcium phosphorus ratio in some grass hays grown in the Western states over the past two years. So, a straight grass hay diet might not solve this problem either.

If pasture grass isn’t an option, I recommend that the forage portion of the diet comprise a majority of excellent-quality grass hay with some amounts of alfalfa. My preference is to keep the alfalfa at 25 to 30% of the total forage intake to not go overboard on calcium but have some to correct any inverted calcium phosphorus in the grass hay, as well as to insure adequate crude protein. If desired, you could replace some grass hay with grain hay.

If your yearling maintains good body weight and sustain growth on an all-forage diet the only thing to add would be a supplemental minerals and vitamins source to ensure the diet is balanced. I particularly like the high-protein ration balancing feeds sold by most major feed companies, because these ensure quality protein along with the key micronutrients.

However, if growth or condition aren’t being maintained with this approach, you’ll need to feed a higher calorie commercial feed designed for growing horses.

Consult with your veterinarian and an equine nutritionist if you have concerns about growth, because it is important that a steady growth rate be maintained to lessen the risks of developmental orthopedic disorders.

Clair Thunes, PhD, is an independent equine nutrition consultant who owns Summit Equine Nutrition, based in Sacramento, California. She works with owners/trainers and veterinarians across the United States and globally to take the guesswork out of feeding horses. Born in England, she earned her undergraduate degree at Edinburgh University, in Scotland, and her master’s and doctorate in nutrition at the University of California, Davis. Growing up, she competed in a wide array of disciplines and was an active member of the United Kingdom Pony Club. Today, she serves as the regional supervisor for the Sierra Pacific region of the United States Pony Clubs. As a nutritionist she works with all horses, from WEG competitors to Miniature Donkeys and everything in between. 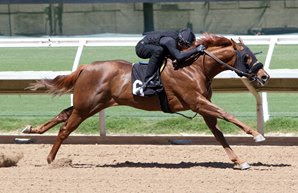