Kaleem Shah’s speedy two-time graded stakes winning Fantastic Style will make her first start for Doug O’Neill as she tries to bounce back off a disappointing odds-on performance here on Dec. 30.

Trainer Peter Miller’s streaking Bad Ju Ju, who was claimed four starts back for $40,000 on Oct. 8, rallied from off the pace to take the 6 ½ furlong Kalookan Queen Stakes here on a wet fast main track Dec. 30 and seeks her fourth win in a row in the Santa Monica.

FINEST CITY: An impressive three quarter length winner of the seven furlong Breeders’ Cup Filly & Mare Sprint when ridden for the first time by Mike Smith, the 5-year-old Pennsylvania-bred mare was a troubled second in last year’s Santa Monica and kept top company throughout the remainder of 2016, posting an 8-2-2-2 mark on the year that included a third place finish to multiple Eclipse Champion Beholder in the Grade I Vanity Mile here on June 4. Owned by Seltzer Thoroughbreds, Finest City, who pressed the early pace in her Breeders’ Cup win, has trained in very impressive fashion here for her return, posting three bullet works dating back to Oct. 27, including a five furlong move of 59.20 on Dec. 21–best of 48 drills at the distance that morning. With an overall mark of 14-4-4-2, she has earnings of $925,594.

FANTASTIC STYLE: A two-time graded stakes winning sprinter, she disappointed at odds of 1-2 when beaten 12 lengths on a wet fast track in the 6 ½ furlong Kalookan Queen Stakes on Dec. 30. After pressing the pace through the first half mile in 21.40 and 44 flat, she tired badly to run fifth in a field of eight. Owned by Kaleem Shah, this 5-year-old mare by Harlan’s Holiday, originally trained by Bob Baffert, will make her first start for Doug O’Neill on Saturday and will be ridden back by Rafael Bejarano. A minor stakes winner here at three going seven furlongs, Fantastic Style can once again be counted on to show plenty of early foot. With an overall record of 10-5-2-2, she has earnings of $383,608.

BAD JU JU: With heavy rain in the local forecast Thursday and Friday, this 5-year-old California-bred mare by Desert Code would appear well positioned on several fronts as Saturday’s main track could well listed as an “off” surface. Owned by Rockingham Ranch, she is undefeated in her three starts for her new connections and will be ridden for the fourth consecutive time by Norberto Arroyo, Jr. While class looms a question as the Santa Monica marks her first graded stakes assignment, Miller has her on a roll and she has recency in her corner. Five for 11 last year, she is 17-7-1-4 overall with earnings of $305,731. 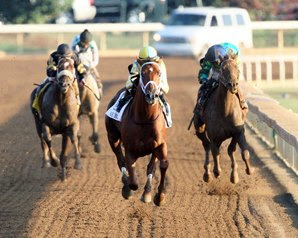 Researchers now define EMS as a cluster of clinical and metabolic abnormalities that are associated with an increased risk of laminitis.

If you look at sensitive hoof tissues of a horse with septic laminitis and one with endocrinopathic laminitis under a microscope (called histology), you can tell the cases apart. Mechanical failure of the laminae, which suspend the coffin bone within the hoof, occurs in both, but it happens differently. In septic cases (with a toxic cause) inflammation and separation of the laminae are evident. In cases linked to endocrine problems, there’s stretching and increased cell proliferation, but no inflammation. These differences are helping scientists understand exactly how and why endocrinopathic laminitis occurs and in which horses.

What researchers recognize as EMS has evolved slightly over the past 10-15 years; they now define it as a cluster of clinical and metabolic abnormalities that are associated with an increased risk of laminitis.

“It’s not these abnormalities equal laminitis, it’s an increased risk,” said Menzies-Gow. “And the (initial EMS) definition has come from human metabolic syndrome, I think that’s where we suffer a little bit when it comes to EMS. We’ve assumed because that if it happens in people like this, then it happens in horses like this, and that’s not always the case.”

Equine metabolic syndrome horses, on the other hand, could be obese, but they don’t have to be. Also, researchers doubt that EMS horses live in a chronic inflammatory state or with hypertension, Menzies-Gow said. Rather, “The consequence for the (EMS) horse is an increased risk of laminitis.”

Overall, key features of EMS are still evolving, particularly because past studies have included horses of different breeds, ages, and sexes and kept in slightly different environments, which can confuse researcher agreement. Menzies-Gow said the current working key features are:

Essentially, horses matching this profile are primed and ready for a clinical laminitis episode, commonly triggered by grazing pasture. “Our current working thoughts are that with consumption of this carbohydrate (fructans) you get a pronounced insulinemic response, which then tips the pony over that threshold and into overt laminitis,” said Menzies-Gow.

She offered the alternative theory that the carbohydrate instead enters the hindgut (the gastrointestinal tract beyond the small intestine), triggering a carbohydrate overload mechanism and absorption of trigger factors, though she favors the hyperinsulinemic response theory.

“Not every pony that has these metabolic abnormalities that goes out to pasture will get laminitis every time,” she said, “so there must be some kind of alternative influence that’s making the individual animal end up being laminitic, whereas the identical one standing next to it grazing exactly the same pasture doesn’t get it.”

That puzzle’s answer is genetics, said Menzies-Gow, because when you consider horse breeds more likely to get EMS, there’s definitely a “type.”

“There are certain breeds that appear to be overrepresented,” she said. “We all know it’s the U.K.-native pony breeds, it’s the Andalusians, it’s things that they get in the (United) States, the Tennessee Walking Horses … Morgan horses, so there’s some kind of breed influence.”

Horses and ponies have genetic alleles (variants) that influence their insulin production and their glucose and lipid metabolism, some of which could decrease their risk of laminitis, she said, and others that increase it. “And those work together with your environment (think sugar levels in grasses, exercise levels, etc.) to give you your overall risk.

“There are some things we can influence, particularly the environment,” she said, referring primarily to dietary management, “but obviously you can’t change the pony’s underlying genetics.”

The Mystery of the Stretching Lamellae

So, how does EMS give you laminitis? Of the three laminitis research models scientists use (carbohydrate overload, black walnut toxicosis and infusion of high doses of insulin), it’s important to look at the insulin infusion model, because that one causes hyperinsulinaemia without inflammation, much like EMS does.

Initially researchers thought EMS-rooted laminitis was a glucose problem—either glucose deprivation or glucose toxicity—because study horses’ high insulin levels indicated they were unable to get glucose into the cells for storage as glycogen. “But we’ve since discovered that glucose transporters that are in the hoof bed are not insulin dependent,” she said. “So that this is not the underlying cause.”

The current theory is that insulin causes cells in the blood vessel lining (endothelial cells) to produce too many vasoconstrictor mediators and not enough vasodilator mediators. In other words, blood vessels constrict rather than dilate, restricting blood flow. In the vital tissues of the hoof, that would result in laminitis.

“Another effect of too much insulin on the blood vessels is it promotes platelet and leucocyte adhesions (basically, platelets sticking to the white blood cells), both of which are a feature of laminitis,” she said.

But Menzies-Gow said the mechanism that’s getting the most attention right now has more to do with cell signaling than blood vessels. Insulin released in the body at normal levels binds to insulin receptors (InsR). At higher levels, the insulin can also bind and activate the insulinlike growth factor-1 receptor (IGF-1R) and/or a hybrid of the two (InsR/IGF-1R). Researchers believe this could weaken the lamellar suspensory apparatus—that characteristic stretching seen on histology—and trigger the onset of laminitis clinical signs.

“It certainly seems that the IGF-1R receptor is the predominant receptor type in equine lamellar tissue, and it’s responsible for regulating cell growth and cell adhesion and survival,” she said. “So it might be that … hyperinsulinemia is inappropriately stimulating IGF-1R, stimulating the epidermal cell proliferation, and that is the key feature that we see in the histology of these models. But it’s yet to be completely determined.”

Stephanie L. Church, Editor-in-Chief, received a B.A. in Journalism and Equestrian Studies from Averett College in Danville, Virginia. A Pony Club and 4-H graduate, her background is in eventing, and she is schooling her recently retired Thoroughbred racehorse, Happy, toward a career in that discipline. She also enjoys traveling, photography, cycling, and cooking in her free time.