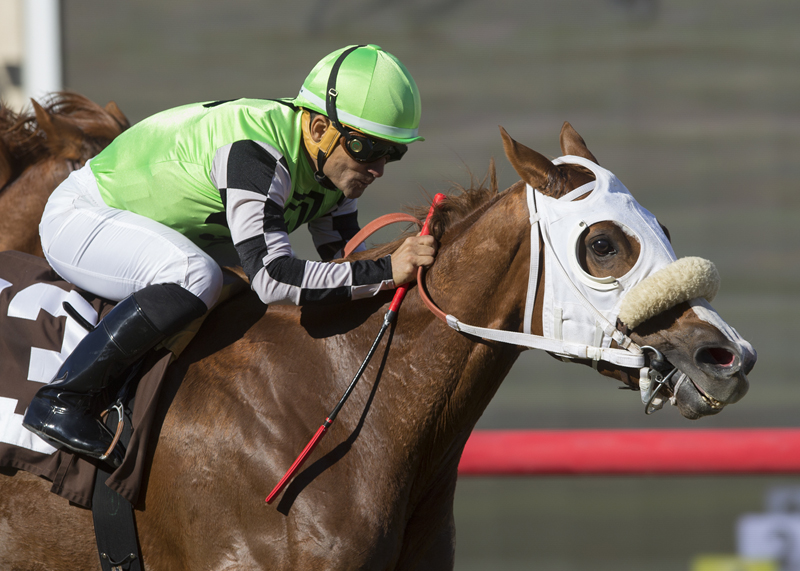 Masterfully-ridden by jockey Corey Nakatani, longshot How Unusual spurted between horses at the top of the stretch to enter contention and outfinished 2-1 favored Responsibleforlove in the final sixteenth to win the featured Grade III $100,000 Red Carpet Handicap on Thanksgiving holiday Thursday at Del Mar.

How Unusual, sent to the gate at 9-1 for the mile and three-eighths grass marathon, was outrun in the early stages, but showed an impressive turn of foot when cut loose by Nakatani to score by a half-length in 2:14.92 for the distance.

Responsibleforlove, with Joe Talamo in the saddle, was runner-up, a half-length in front of Laseen, with La Manta Gris fourth in the field of 12 older fillies and mares. Galileo’s Song and Lottie were withdrawn from the original field.

There were no perfect tickets in Thursday’s Pick Six, so Friday’s card will have a carryover of $49,099.

Friday’s program features the Grade II $200,000 Hollywood Turf Cup for older horses at a mile and one-half on the grass. Post time for the first of eight races is 12:30 p.m.

COREY NAKATANI (How Unusual, winner) – “Mike (trainer Mike Pender) and I talked and we both agreed that there was only one way to go with her: to take her back, get her to settle and into a nice rhythm and then make that late run. I thought sure she’d handle the distance and she did. She’s a nice filly.”

TIAGO PEREIRA (Laseen, third) – “I had nowhere to run around the turn; I had to wait. Then she came late. If I can get out and get a place, I think we win.”

MIKE PENDER (How Unusual, winner) – “She’s coming around, this filly. Every race gets a little bit better than the one before. We bought her for a ham sandwich at the end of last summer (2016). We bought her for $80,000 privately from Madeline (Auerbach). We’re really happy with this filly and that was a great ride by Corey (Nakatani).”

The stakes win was the second of the meet for rider Nakatani and his first in the Red Carpet. He now has 108 stakes wins at Del Mar, second most all time.

The stakes win was the first of the meet for trainer Pender and his first in the Red Carpet. He now has three stakes wins at Del Mar.

Several of the wagering interests in the opening pool of the Kentucky Derby Future wager will be in action over the next three weeks in Saturday’s $200,000 Kentucky Jockey Club (G2) at Churchill Downs, the $250,000 Remsen (G2) at Aqueduct on Dec. 2 and the $300,000 Los Alamitos CashCall Futurity (G1) on Dec. 9.

Daily cleaning of your horse’s hooves can help not only treat but also prevent thrush.

I own a 13-year-old Paint gelding and live in an area where it’s been very wet lately. My horse is out in the pasture year round, but he has a run-in for shelter. When I picked his feet today, I noticed that his frog was soft and the part towards the heel was white.

He is my first horse and he hasn’t had had any feet problems in the two years I’ve owned him, except for losing shoes. How do I treat this and how can I keep his feet dry? He is currently wearing shoes and bell boots on his front feet. Any help would be appreciated.

Due to the rain your horse could be suffering from thrush in the frog, which is a bacterial infection of those tissues, especially over the central sulcus, or cleft. You will notice black malodorous exudates over the area. Thrush is caused by Gram-negative anaerobic (not requiring oxygen to grow) bacteria, and it is often benign, but sometimes the bacteria can invade sensitive tissue, causing prolonged infection and lameness.

Daily cleaning of the dirt/debris/mud can help eliminate trapped moisture and prevent opportunistic bacteria from taking over and creating an infection. This can help not only treat but also prevent thrush. Also provide a clean environment (like a stall) to help your horse’s feet stay dry.

Since the bacteria involved are anaerobic, it is important to open and allow oxygen to get into the affected area. Over-the-counter products are available to treat thrush, and foot soaks can also help your horse fight the bacteria. I personally like to use a hoof care product called Kevin Bacon if the thrush is only in the early stages, but if sensitive tissue is exposed I used a diluted povidone-iodine (Betadine) product such as Xenodine.

If your horse becomes lame after prolonged infection I recommend calling your veterinarian time to provide further evaluation. If the horse lives outside all the time without an available stall, you can manage the case with foot wraps or commercial boots to keep his feet clean and dry.

Raul Bras, DVM, CJF, is a podiatrist and shareholder at Rood & Riddle Equine Hospital in Lexington, Kentucky, where he sees a variety of foot and lameness-related cases. He graduated from Cornell University’s farrier school in 2007 and became a certified farrier in 2009 and a certified journeyman farrier in 2010.