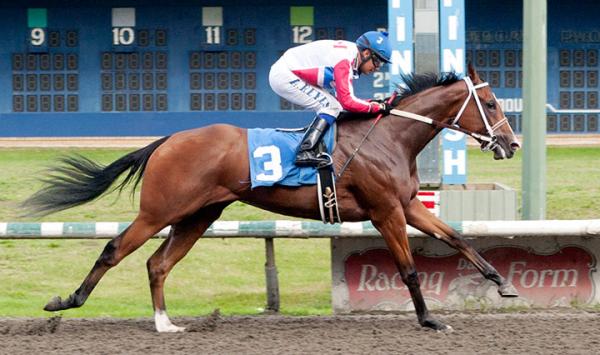 Four-Footed FotosInfinite Patience will make her first start on Tapeta in Sunday’s Fury Stakes at Woodbine.

How will the unbeaten British Columbia invader Infinite Patience fare on the Tapeta, in her first start in nearly nine months. Why is trainer Josie Carroll running both Curlin’s Voyage and Avie’s Samurai in the seven-furlong prep for the $500,000 Woodbine Oaks? Do American shippers Mizzen Beau and Justleaveitalone have a chance?

Trained by Barbara Heads, Infinite Patience won five races at 2, including four stakes, all on the dirt at Hastings. The British Columbia-bred daughter of Sungold has been working bullets there since late May, including five-eighths in a quick 58.40 seconds last Sunday.

Infinite Patience goes into the Fury without a race or work on the Tapeta, which is often a negative, but her forward style could carry her a long way in a six-horse field without much other speed.

Infinite Patience was second to Grade 3 winner Curlin’s Voyage in the 2019 Sovereign Award voting for champion 2-year-old filly. Curlin’s Voyage rallied inside for second behind the favored front-runner Owlette in her June 13 season opener in the six-furlong Star Shoot Stakes.

:: Want to get your Past Performances for free? Click to learn more.

“She just needed more ground,” Carroll said. “I think she’s truly a two-turn filly, but we’re in a different year, a year of compromises, where we have to find the best way to get them to a race.”

After graduating second time out at 2, Avie’s Samurai was a minor player in stakes company. When coming off a winter layoff June 13, she aired in a seven-furlong allowance, scoring by 4 3/4 lengths with an 85 Beyer Speed Figure.

“She’s a different horse than last year,” Carroll said. “She grew up a lot.”

Carroll said she opted for the Fury over the 1 1/16-mile Selene here July 25 as their final Oaks prep due to the timing of the Grade 3 Selene, which is three weeks before the Aug. 15 Oaks.

“I would have liked to have gotten those fillies around two turns, but unfortunately, the Selene is just too close to the Oaks,” Carroll explained. “If you don’t come out of it sharp and good, and you take too much out of your horse. You’re going to cook them for the Oaks.”

Justleaveitalone didn’t show a whole lot this year in maiden special company on dirt and turf at Gulfstream and Churchill. Her lone Tapeta excursion was a second to Fast Scene in the 5 1/2-furlong My Dear Stakes here a year ago.

Mizzen Beau has no synthetic-track experience. She was a distant second in a June 5 allowance route on the dirt at Churchill.

Rounding out the field is Gun Society, who has been idle since upsetting Owlette in the restricted South Ocean Stakes here Nov. 16.