The four-length victory came about an hour before Sneaking Out, a 7-1 shot, upset heavily-favored Bellafina in the Grade II, $201,000 Great Lady M. Stakes 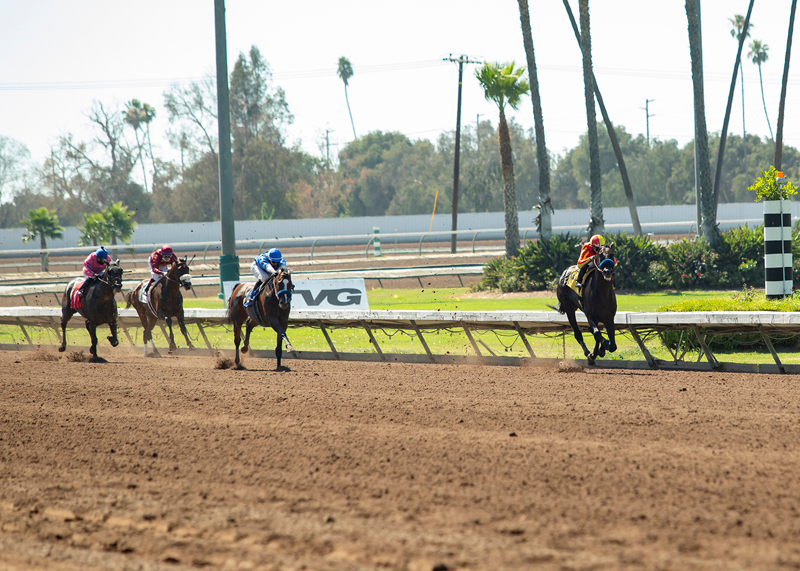 Trained by Hall of Famer Bob Baffert for owners Mike Pegram, Karl Watson and Paul Weitman, Uncle Chuck, a 3-year-old son of Uncle Mo, tracked the pace outside Great Power for about six furlongs, looked like he might face a challenge from stablemate Thousand Words, but kicked away to win in 1:47.65 for the 1 1/8 miles (photo).

The victory was the fourth in a row for Baffert in the Los Alamitos Derby and the fifth in seven years since daytime thoroughbred racing returned in 2014. The other winners include Gimme Da Lute (2015), West Coast (2017), Once On Whiskey (2018) and Game Winner last year.

A $250,000 purchase out of the 2019 Keeneland September sale, Uncle Chuck, who is out of the Unbridled’s Song mare Forest Music, paid $2.80 as the 2-5 favorite. There was no place or show wagering in a race reduced to four starters after Anneau d’Or was scratched due to illness.

“That was good,’’ said Baffert. “At the top of the lane, I thought Thousand Words might get him, but at least that horse ran better.

“We’re just learning more and more about Uncle Chuck. He’s still pretty green, but he’s got gears. (Saez) was excited about him and I think he’s one of the top riders in the country. He said Uncle Chuck is still learning and has got a lot of improvement in him.

“The colt was full of himself when he came back.  It’s exciting. He’s learning quickly and he has brilliance. I was impressed.

“I think we just saw something pretty special and he’s been special from day one. He’s bred to be any kind.’’

Racing without blinkers for the first time since he scored in his sprint debut last Oct. 26, Thousand Words was seeking his initial victory since capturing the Grade III Robert B. Lewis March 7.

Saez, who gained the mount on Uncle Chuck since Hall of Famer Mike Smith was at Belmont Park to ride McKinzie in the Metropolitan Handicap, had a double for Baffert as he also won the first race aboard debuter Mohemian Rhapsody.

“(Uncle Chuck) broke great and I just left him alone,’’ said Saez. “He was doing it easy all the way. When I showed him the whip in the stretch he took off. He’s a very nice colt.’’ 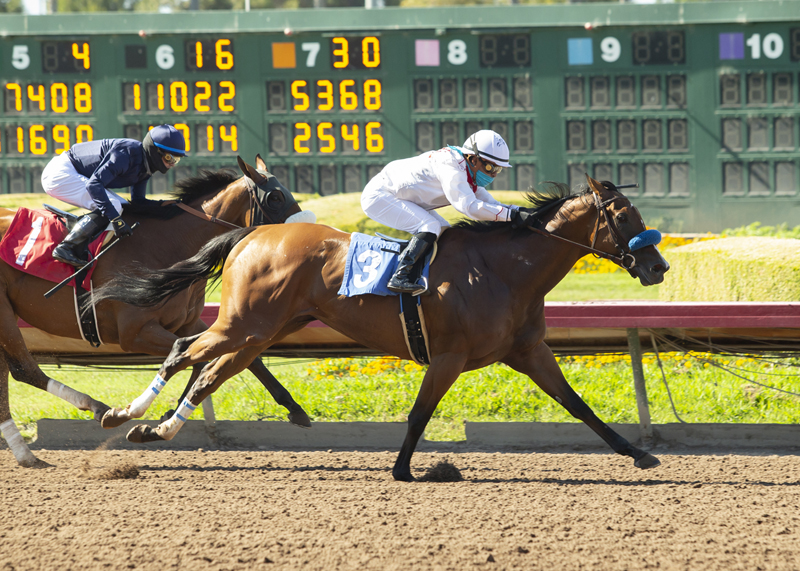 Owned by breeder KMN Racing LLC and trained by Hall of Famer Jerry Hollendorfer, Sneaking Out (left) earned her fifth win in her 11th start, but it was the first in a graded event for the 4-year-old California bred daughter of Indian Evening.

Positioned outside pacesetter Artistic Diva by jockey Martin Garcia, Sneaking Out took over inside the final quarter of a mile and prevailed by three-quarters of a length over Bellafina, the 1-2 choice who was seeking her eighth graded win.

The win was the second in the Great Lady M. for Hollendorfer, who captured the inaugural running in 2014 with another Cal bred – Doinghardtimeagain for owner-breeder Tommy Town Thoroughbreds.

“That was nice,’’ said Hollendorfer. “She was laying outside and she got a little breather around the turn and when (Garcia) asked her to go she had a lot left. She finished up really well.

“I thought she could be the speed if she wanted, but we learned at Oaklawn Park that she didn’t have to have the lead. She ran a huge race there (April 25) where she got passed, then came back on and won the race.’’

Sneaking Out, who has been worse than second only twice, increased her earnings to $431,441.

Racing resumes Sunday at Los Alamitos. Post time for the final day of the Summer Thoroughbred Festival is 1 p.m.