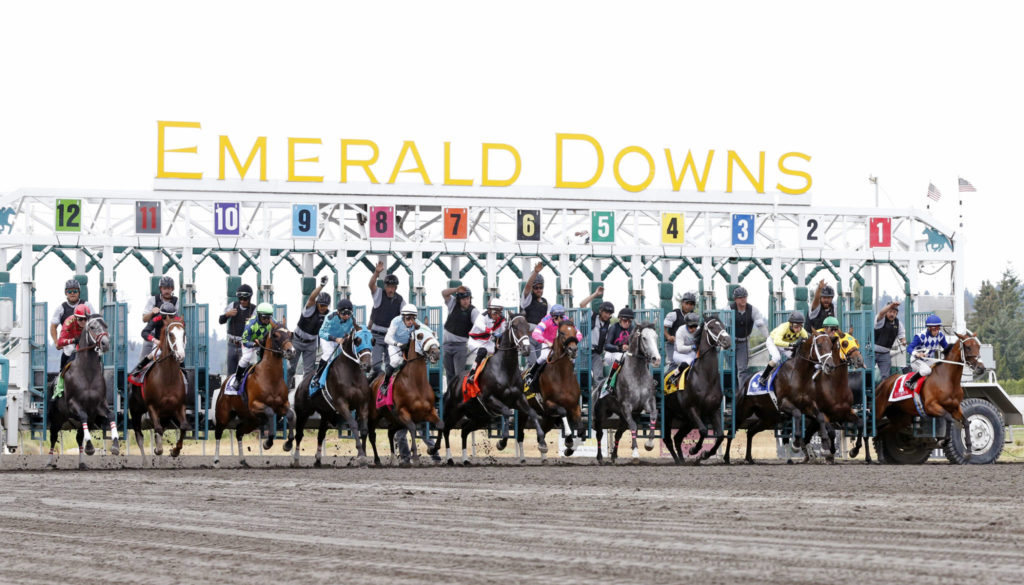 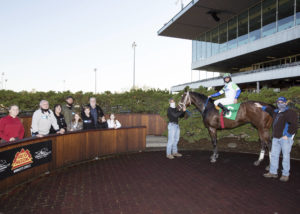 Thursday, Oct. 29, Race 1, purse $23,100 ALW/$40,000 claiming, 3-year-olds & up, 6 Furlongs:  There are 97 horses entered in 11 races on closing day, including 48 in the final $0.50 Pick 5 of the season. So bring the big voucher. The card begins with a bang as Papa’s Golden Boy guns for his fourth sprint victory of the meet. This one, however, is a tougher test than the one Papa aced two weeks ago. Blaine Wright entered the tough duo of Windribbon and Oh Marvelous Me, while Catfish Hunter and Makah Lane have run sprints this season good enough to threaten here. Hollywood Heat rounds out the field and has a pair of interesting stats this season, producing the biggest $2 win mutuel of the meet ($105.60) on Aug. 13, and going off at the biggest odds (129.80 to 1) in the 85-year-history of the Longacres Mile while finishing eighth to Anothertwistafate on Sept. 10.

From: Phil Ziegler & Jack Hodge – Emerald Downs
As we conclude this very unusual race season, we want to thank all our stakeholders for working together safely. COVID-19 presented unprecedented challenges, not only at the track but in all aspects of our lives.
We were the first professional sport to return in the state of Washington and through all our efforts we were able to put on a successful meet.
Attempts to predict future effects of COVID would be futile. It is likely that we will all be impacted throughout most of 2021. We certainly hope that our race fans can return in 2021 even if it is at a reduced capacity.
Based on what is known now, we are planning on opening for training on Monday, March 1, 2021.
The 2021 season would begin in mid-May and conclude sometime in September. Questions such as how many days per week, which days, and post times will all be discussed at a later date when we have more information.
Please pass this information along to your membership along with our best wishes for good health during the off season. 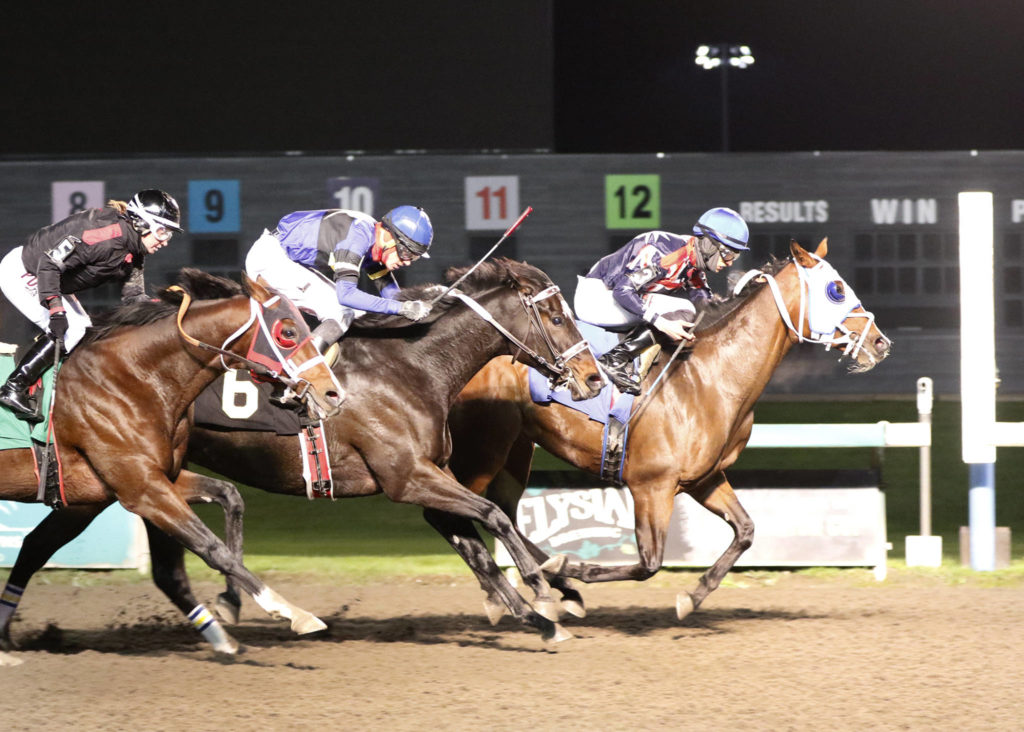 Stand To (No. 3 with white blinkers) prevails in Thursday feature race

AUBURN, Wash. (Oct. 22, 2020) – Stand To finally shook off Spittin Image in the final strides for a half-length victory Thursday in the $20,900 Muckleshoot Casino Purse for 3-year-olds at Emerald Downs.

Ridden by Alex Anaya, Stand To ran 6 ½ furlongs in 1:16.13 and paid $9.20 as third choice in the wagering. Rigoberto Velasquez is the winning trainer for owner/breeder John Sneesby.

An improving son of Harbor the Gold, Stand To has two wins and three thirds in five starts this season with earnings of $29,620. He most recently had finished third against the extremely quick 4-year-old Papa’s Golden Boy on Oct. 15.

Stand To and Spittin Image raced virtually head and head from gate to wire, dueling through fractions of :22.39, :44.61 and 1:09.33, with Stand To edging clear late for the victory.

Spittin Image, the 9 to 5 betting favorite, dueled outside the winner and notched his third consecutive runner-up finish. A full brother to 2016 Horse of the Meeting O B Harbor, Spittin Image has finished in the money five of seven starts this season.

Muncey was a neck back in third place, while Aero Street, Lolo Paniolo, Harbors Rule and Haveulostyourmind completed the order of finish. Lolo Paniolo, bidding for his third allowance win of the season, broke in the air and rallied late for fifth.

NOTES: Alex Cruz rode three more winners and extended his lead to 65-48 on Juan Gutierrez in the jockeys’ standings, while defending champion Gary Wales is third with 47. . .Cruz also had four seconds and extended his consecutive days winning streak to 23. . .Kevin Radke owns the track record with 30 straight winning days in 2003. . .Harbor the Gold was the winning stallion of three winners Thursday including a one-two finish by Stand To and Spittin Image in the feature. . .Plenty of 2-year-old action Thursday, including Forever Gold ($5.80) winning a $20,900 allowance in 1:11.37 for six furlongs and Ethan’s Animal ($7.20) prevailing in a $20,350 maiden special weight in 1:10.59 for six furlongs. By Animal Kingdom, Ethan’s Animal is the first foal out of multiple Emerald Downs’ stakes winner Ethan’s Baby. . .Hard-hitting 6-year-old Buckley Bay ($5.20) became a triple winner at the meet with a victory vs. $15,000 claimers in race two, running six furlongs in 1:09.43. . .Live racing continues Wednesday, Oct. 28, at 2:15 p.m.
–##– 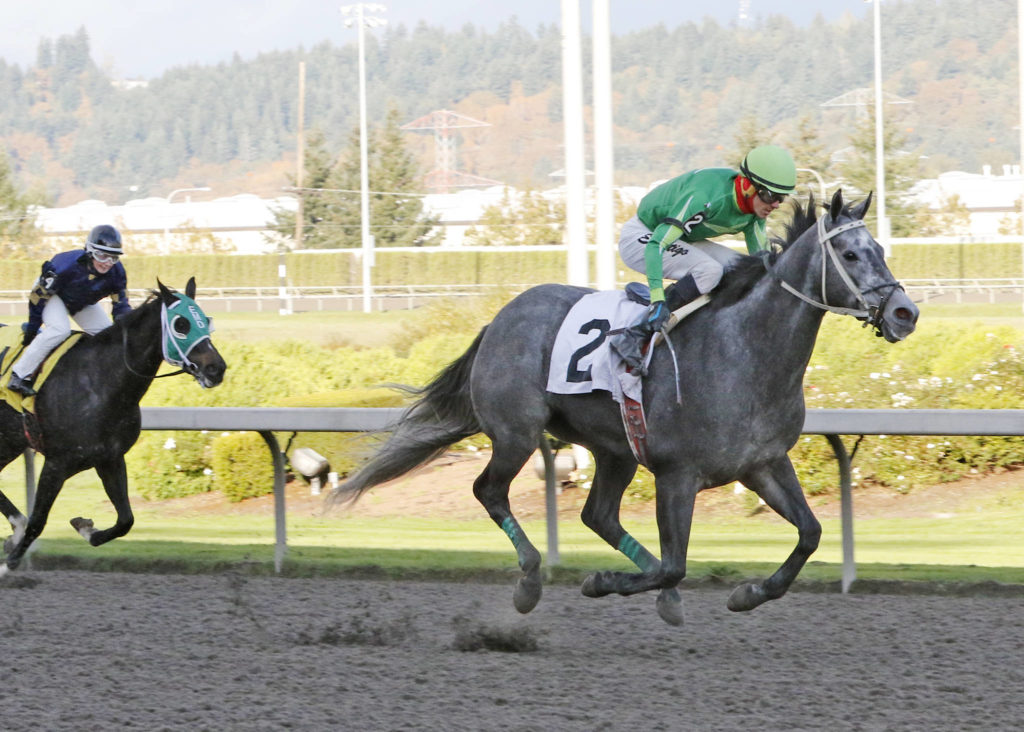 Dontkissntell draws away for a 4 3/4-length victory

With Cruz extending his consecutive winning days streak to 22, Dontkissntell ran 6 ½ furlongs in 1:15.81 on a fast track and paid $6.20 as the betting favorite. Tom Wenzel is the winning trainer for owner Darlyne Krieg of Oak Harbor Wash.

For You Only, longest shot on the board at 12 to 1, finished second under Jennifer Whitaker while Paddy’s Secret, Windy Point, Diamonds R and Fortune’s Freude rounded out the order of finish.

Dontkissntell sat behind a three-horse pace duel, circled four-wide into the lane and collared the leaders past mid-stretch and drew off powerfully. It was her first victory in five starts this year and ended a string of eight straight losses since an eight-length allowance victory in April 2019.

For You Only, a 3-year-old filly, continued a strong 2020 campaign that includes a second to Daffodil Sweet in the Coca-Cola Stakes and three runner-up finishes in allowance races. 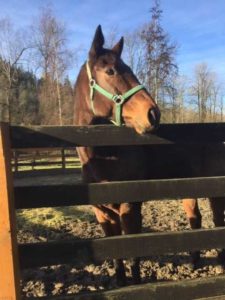 NOTES: Total mutuel handle was $1,446,242 on the 10-race card. . .The meet’s leading rider with 62 victories, Cruz began his streak August 6 and leads Juan Gutierrez 62-48 with three days remaining in the 2020 season. . .Wenzel now has 400 wins at Emerald Downs, only the eighth trainer to reach that milestone. . .Zanab ($7.60) went out a winner with a victory in race eight, collaring Classic Leah in the final yards for a neck victory. A 9-year-old Montana-bred, Zanab finished the season with two straight wins and was 7 for 16 the last three seasons for trainer Sharon Ross. . .Remembertobreathe, also 9 years old, became a triple winner at the meet with a $41 upset in race nine. Alex Anaya was aboard for owner Dawn Spillman and trainer Robbie Baze. . .Owner/trainer Roger Hamshar notched his first win of the meet, scoring with Amanda’s Beach Boy ($17.80) in the Wednesday opener. . .Veteran trainer Bill Tollett also scored his first win of the season when Mitch and John E ($6) romped in race two. For Tollett, it was his 311th career win at Emerald Downs. . .Hey Sequoia ($7.40) edged West Coast Indy in Tuesday’s $11,900 Chuck Potter Marathon Stakes at Grants Pass. Ridden by Nakia Ramirez, Hey Sequoia ran 1 11/16 miles in a track record 2:59.53. . .Live racing continues Thursday at 5 p.m. 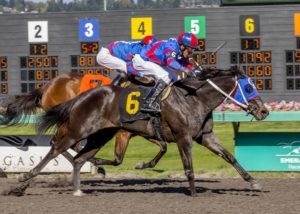 Wednesday, Oct. 21, Race 5, purse $23,100, ALW/$40,000 claiming, fillies & mares 3-year-olds & up, 6 ½ Furlongs: After missing by a head vs. Alittlelesstalk in the Washington Cup, razor-sharp Fortune’s Freude drew a good post and should rebound against a good field of older fillies and mares. Dontkissntell has lost all four starts this year, three against Alitttlelesstalk and one against Killarney Lass. She faces neither of those fillies here and cuts back to perhaps her most effective distance. Paddy’s Secret ate up ground late to grab second in the WA Cup, and she did win a sprint stakes in Phoenix two years ago. Diamonds R is better than her seventh in the Washington Cup and worked a bullet half-mile last week. Neither Windy Point nor For You Only wanted any part of two turns, but the speedy 3-year-olds have both run well at 6 1/2 furlongs. 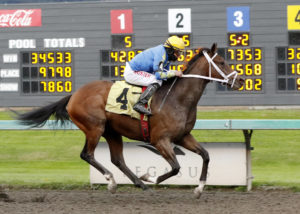 Thursday, Oct. 22, Race 9: purse $20,900 ALW/$30,000 claiming, 3-year-olds, 6 ½ furlongs: Four of the seven horses exit the same Oct. 8 race in which Lolo Paniolo took advantage of a favorable pace scenario to win going away in 1:36 for a flat mile. Lolo has won sprinting and routing this year and has run three good races for this rider. Spittin Image was bound to be compared to O B Harbor, his talented older brother who was the best horse at this track four years ago. Spittin Image isn’t quite there yet, but he’s improving every out and a big threat to take this field gate to wire. Muncey has earned $23,000 this season the hard way, piling up seconds and thirds in stakes and allowances short and long vs. the likes of Unmachable and Papa’s Golden Boy. He finished third as the 3 to 5 favorite two weeks ago, but might have lost his punch while laying closer to the pace than normal. Stand To is improving with every race and held his own in his first against winners. Aero Street has a good stretch kick but is facing tougher rivals.