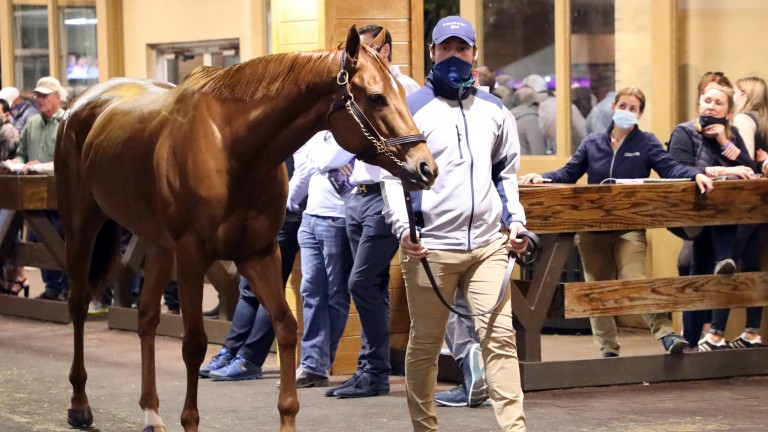 Monomoy Girl sold for $9.5 million but is expected to remain in training
Fasig-Tipton Photo/Photos by Z
1 of 1
By Ron Mitchell of BloodHorse 9:06AM, NOV 9 2020

Fuelled by nearly insatiable demand for top racing and broodmare prospects and a deep buying bench headed by B Wayne Hughes’ Spendthrift Farm, The November Sale, Fasig-Tipton’s breeding stock sale in Lexington, lived up to its “Night of the Stars” moniker on Sunday.

Fasig-Tipton president Boyd Browning Jr was blown away by the strength of the sale, noting it was a credit to Fasig-Tipton’s customers who entrust their prized stock to the sale company.

“A remarkable evening,” Browning said. “If someone would have told me or you all six months ago when our world kind of changed, or six weeks ago, six days ago, or yesterday that we were going to sell $80 million of horses tonight and 22 for $1 million or more, they probably would have taken me out of here in a straitjacket and said he is now delusional.

Hip 192 MONOMOY GIRL sells for $9.5M at The #FasigNovember Sale! Congrats to the connections:

“There’s no magic. The success of this sale was built upon having a tremendous catalogue of quality horses. It was a spectacular catalogue.

“It’s a relationship-based business,” Browning continued. “It’s not just me. If you go through that (Fasig-Tipton) office, on our sales team, every person involved in the organisation has a key factor in recruiting some of these elite horses, and that’s why it works.

Not surprisingly, the star of the show was Monomoy Girl, the champion filly who made a courageous return to the top ranks of competition this year after missing all of 2019 due to colic and a pulled muscle.

She went into the sale ring off an impressive second victory in the Longines Breeders’ Cup Distaff at Keeneland the day before the auction. Consigned as part of the ELiTE consignment, Monomoy Girl was purchased by Spendthrift for $9.5 million.

The price tied two-time champion Songbird for the third-highest paid at the November sale for a filly or mare, exceeded only by the $14 million paid for Better Than Honour and the $10 million price tag for Horse of the Year Havre de Grace.

Spendthrift general manager Ned Toffey said the numbers were not surprising, considering those mares were at the top of the market.

“The kind of mares we zero in on at this sale, they aren’t affected as much by market conditions,” Toffey said. “We were pretty sure that for the high-end mares, it would be very competitive.

“The big question is with the lesser mares here and all through the books at Keeneland (November Breeding Stock Sale), what will that be like? With the yearling sales down, who knows what that market will hold. We are as curious to see as anybody.” 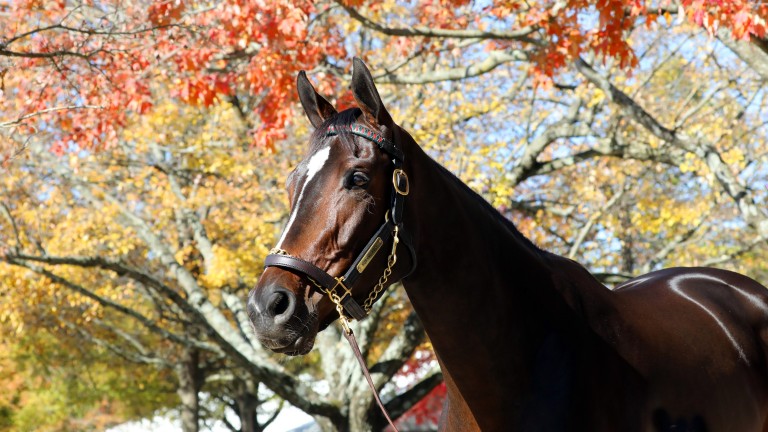 The top price for a weanling was the $600,000 paid by OXO Equine for a colt from the first crop of City of Light consigned by Hunter Valley Farm.

Browning said the market for weanlings was selective as pinhookers who buy to resell the following year had been impacted by the Covid-19 market of 2020.

“I don’t think there is any question that weanling pinhookers that bought in 2019 and sold in the 2020 market had a very difficult year, so I think it stood to reason that there would be a little more restraint overall with the pinhooker group, and some of the high-priced weanlings were sold to end-users,” he said.

“We know the targets get a little bit narrower. I think there was a little more hesitancy on the weanling side of things tonight than there would have been a year ago.”

The farm, founded in 1972 by Ernie Samuel, became a renowned racing and breeding operation; some stock on offer at Fasig-Tipton Nov. Sale. Sam-Son Farm, one of the most celebrated and successful Thoroughbred operations in North America, announced today that it will be dispersing its breeding and racing stock during the next 12-18 months. Sam-Son is partnering with the Fasig-Tipton and Keeneland organizations to present this rare opportunity for buyers to acquire world-class racing talent and breeding stock from one of the true breed-to-race operations in the business.

Ernie Samuel founded Sam-Son Farm in 1972 and built it into a world-renowned racing and breeding operation. After his death in 2000, his daughter Tammy Samuel-Balaz took over the reins at Sam-Son and led the farm to numerous victories and awards until her own passing in 2008. Today the farm is run by Farm Manager, Dave Whitford, and Racing Manager, Tom Zwiesler, under the leadership of owners, Rick Balaz, (President), Mark Samuel (CEO) and Kim Samuel, who have sustained and built upon the farm’s sterling reputation and legacy of success. After serious consideration and discussion, the owners have unanimously decided to initiate an orderly dispersal and to step back from active participation in the racing and breeding world.

Sam-Son Farm has bred and raced 44 Graded stakes winners in the famed red and gold silks, including 37 Classic winners, and 14 Grade 1 winners. The legendary operation has garnered 84 Sovereign Awards and won four Eclipse Awards, including the 2019 Sovereign Awards for Owner and Breeder of the Year.

The Samuel/Balaz families commented as follows; “We are enormously proud of the quality and longevity of Sam-Son Farm and have enjoyed nurturing and celebrating every stage of the equine cycle from breeding, to raising, to racing, to retirement and often, returning to the breeding shed. Our horses have given generations of our family such fulfillment and excitement over the years and we felt that the time had come, after five decades, to now share that legacy with the world. It was a bittersweet decision but one that we are committed to pursuing with integrity, transparency and respect. Our horses and our amazing, dedicated employees deserve no less.”

Sam-Son has seen its iconic red and gold silks carried by such champions as Dance Smartly, the first Canadian owned and bred horse to win a Breeders’ Cup race and who, in her undefeated 3-year-old season of 1991, became just the second filly in history to win the Canadian Triple Crown. Other champions include Breeders Cup winner Chief Bearhart, Eclipse Award winner Sky Classic; Dancethruthedawn, Quiet Resolve, Rainbow’s for Life, Ruling Angel, Silken Cat, Soaring Free, Wilderness Song and many more. Sam-Son also bred and raced Grade 1 winner and influential sire Smart Strike, a half-brother to Dance Smartly. The son of Champion Sire Mr. Prospector had a magnificent career at stud. A true sire of sires, Smart Strike topped the American General Sire List in 2007 and 2008 and was inducted into the Canadian Racing Hall of Fame in 2008.

Rideforthecause, a lightly raced daughter of Candy Ride (ARG) out of the Giant’s Causeway mare Danceforthecause notched her 1st Stakes win on September 12th of this year in the GII Canadian Stakes at Woodbine. She represents one of the oldest and by far the most successful family in our program, dating back to none other than foundation broodmare, No Class. This filly’s star is on the rise, making her a magnificent racing and breeding opportunity.

Woodbine Oaks winner Desert Ride dates back to Oleana through five generations, giving her the unique distinction of being a descendant of the oldest family in our program. She is a daughter of the Distorted Humor mare Fun in the Desert who herself is a half-sister to champion Eye of the Leopard. Desert Isle is by leading broodmare sire Bernardini and is also a member of this family. She is a half-sister to Eye of the Leopard, making her a daughter of the Champion Filly and Broodmare Eye of the Sphynx.

“Sam-Son Farm has been an iconic name in Thoroughbred racing and breeding for nearly half a century. This program has produced numerous Grade 1 winners, Champions and Hall of Fame racehorses. Sam-Son horses have had a profound influence in top pedigrees around the world and will continue to do so for many generations. Although saddened to see them dispersing their Thoroughbred holdings, we are honored to assist them in this process.” stated Boyd Browning, President and Chief Executive Officer, Fasig-Tipton Co.

Sam-Son Farm will present its remaining in-foal mares at the 2021 Keeneland January Horses of all Ages Sale. This consignment currently stands at 21 and will feature a unique audio-video presentation of each individual mare on the morning of Saturday January 9th. This quality group includes Grade 1 producers Danceforthecause and Song of the Lark as well as young stakes winning mares Checkered Past, Dance Again, Deceptive Vision, Mythical Mission, Smartyfly and Southern Ring. Covering sires include American Pharoah, Candy Ride (ARG), Into Mischief, Kitten’s Joy, Speightstown and Street Sense.

“Keeneland and Sam-Son Farm have enjoyed a long, successful relationship,” Keeneland President-Elect and Interim Head of Sales, Shannon Arvin said. “Over the years, a number of Sam-Son horses have raced here, and the farm received the prestigious Keeneland Tray during the 2005 Spring Meet to recognize its graded stakes success – a milestone that only 20 owners have reached in track history. We are privileged that Sam-Son has entrusted Keeneland to offer this distinguished group of mares at the January Sale.”

This announcement represents a once in a lifetime opportunity to invest into some of the most successful and lasting bloodlines in North-America that, until now, had been very difficult to access. The Jockey Club today released Report of Mares Bred (RMB) statistics for the 2020 breeding season. Based on RMBs received through October 18, 2020, The Jockey Club reports that 1,067 stallions covered 27,970 mares in North America during 2020.

The Jockey Club estimates an additional 2,500 to 3,500 mares will be reported as bred during the 2020 breeding season.

RMB statistics for all reported stallions in 2020 are available through the Fact Book section of The Jockey Club’s website at jockeyclub.com.

During 2020, Kentucky’s 200 reported stallions covered 16,391 mares, or 58.6% of all of the mares reported bred in North America. The number of mares bred to Kentucky stallions decreased 4.3% percent compared with the 17,123 reported at this time last year.

The Jockey Club announced on September 18, 2020, that it has updated the Principal Rules and Requirements of The American Stud Book following approval by the board of stewards of The Jockey Club.
While the changes apply to various parts of the rule book, the more noteworthy changes were made to support the Registry’s operations and customers’ interactions with the Registry in connection with the increased use of digital certificates of foal registration, which started with the 2018 foal crop. The glossary of terms was expanded to include Certificate Manager and rules 2, 7, and 21 include new references to Digital Certificates or Certificate Managers.
“The updated rule book accounts for recent modernizations to the Registry that streamline processes and enhance customer convenience,” said Matt Iuliano, executive vice president and executive director of The Jockey Club. “We recommend that owners and breeders consult registry.jockeyclub.com to find the most current rules in full.”