I’m going on vacation as of today for a couple of weeks,  Derby Newsletter will return on my return.

A guaranteed $2000 bonus for any horse’s first start at Hastings Racecourse whose previous start was made outside of British Columbia.

A guaranteed $2000 bonus for any horse’s first start at Hastings Racecourse whose previous start was made outside of British Columbia. 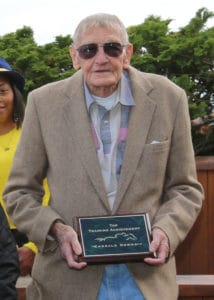 AUBURN, Wash.) – Hilbern R. “Pat” Mullens, a trainer in the Northwest for nearly a half-century, died December 28 after a long illness. Mr. Mullens was 92.

A trainer at Emerald Downs since its opening in 1996, Mullens was among the most successful and popular horsemen at the track. He saddled 243 winners, including six stakes wins, and over $2.6 million in earnings in 24 seasons at Emerald Downs.

In 2018, Hit the Beach scored victories in the Muckleshoot Tribal Classic and Pete Pedersen Overnight Stakes as Mullens became the oldest trainer to win a stakes at Emerald Downs. Campaigned in partnership with longtime clients Ed Zenker and Swede Larsen, 5-year-old Hit the Beach was named Washington’s champion older horse while Mullens was voted the track’s top training achievement. In 2006, Mullens trained She’s All Silk to a victory in the $100,000 Washington Oaks and honors as state champion 3-year-old filly.

Born February 27, 1927 in Ramer Tennessee, H.R. Pat Mullens served in the United States Air Force for 21 years, before beginning a second career as a Thoroughbred trainer in the early 1970s. His first winner, Trespasser, was at Longacres in 1972. In 2001 and 2004 Mullens was honored with Emerald Downs’ Martin Durkan Award for leadership, sportsmanship and cooperation.

“Pat was the kindest person you could ever encounter,” said Emerald Downs President Phil Ziegler. “He will be missed by everyone associated with Emerald Downs and racing throughout the region. He was a special member of our family.”

ARCADIA, Calif. (Dec. 31, 2019)–Veteran trainer Gary Sherlock, who would’ve turned 74 on Jan. 1, passed away at an Arcadia care facility on Sunday following a lengthy bout with cancer.  The son of a jockey, William and racing official, Mary, Sherlock was born at 1:12 a.m. on Jan. 1, 1946 in San Francisco, and was thus celebrated as the first baby born in the City by the Bay that year.

Raised in Pleasanton, CA, Sherlock was destined for a life on the racetrack and in addition to training, he also enjoyed success as an insurance agent, specializing in racetrack workers’ compensation policies for trainers and also as a bloodstock agent.

A top trainer for many years with Quarter Horses at Los Alamitos, routinely finishing in the top five slots in the standings in the 1970s along with the likes of D. Wayne Lukas and Blane Schvaneveldt, Sherlock won high profile races such as the 1977 Los Alamitos Derby with Azure Three and the 1980 Doc Severinsen Handicap with American Jet.  Prior to switching to Thoroughbreds full time, he won 353 Quarter Horse races from 1966 to 1980.

Known as a consistent developer of 2-year-olds, Sherlock enjoyed his greatest career success in 2008 with the 4-year-old filly Intangaroo, with whom he won three Grade I, seven furlong stakes, the Santa Monica Handicap at Santa Anita on Feb. 2, the Humana Distaff on Kentucky Derby Day, May 3, at Churchill Downs, and the Ballerina Stakes at Saratoga on Aug. 24, 2008.  (All three wins came in partnership with jockey Alonso Quinonez).

Sherlock would go on to win the Santa Monica a second time, in 2016 with California-bred Lost Bus, who scored at odds of 64-1.  Owned and bred by Sherlock’s primary client, Terry Lovingier, Lost Bus, a 4-year-old daughter of Bring the Heat, paid $131.20 with Fernando Perez aboard.

Sherlock would also experience the Triple Crown trail for the first time in 2016, as his speedy Uncle Lino, who was third in the Grade I Santa Anita Derby and a subsequent winner of the California Chrome Stakes at Los Alamitos, set the early pace prior to fading to seventh in the Grade I Preakness Stakes on May 21.

Sherlock’s most recent “big horse” was Lovingier’s California-bred Show It N Moe It, a soon-to-be 5-year-old mare by Grace Upon Grace who to date, has earned $515,541 from an overall mark of 27-6-6-6.  A two-time stakes winner, Show It N Moe It’s most recent start came on Nov. 17 at Del Mar–a second place finish in the Betty Grable Stakes.

A savvy handicapper who loved playing the races, Sherlock had great instincts which enabled him to enjoy a high degree of success over the long haul.

Sherlock is survived by his wife Sharon, sons Brian and Michael (Mikey), who works as an assistant starter at Santa Anita, Del Mar and Los Alamitos, as well as two grandsons, Tanner and Luke.

At his request, there will be no memorial services for Gary Sherlock.