Stakes action at historic Saratoga Race Course kicks off with a field of eight 2-year-old fillies assembled for the 102nd running of the Grade 3, $100,000 Schuylerville on Thursday, Opening Day of the summer meet.

Hall of Fame trainer Mark Casse will send out John C. Oxley’s impressive maiden winner Beautiful Memories, who romped by 10 lengths in her career debut on May 28 at Churchill Downs.

The homebred chestnut daughter of Hard Spun received encouragement coming out of the gate in her debut before taking command and extending her lead through every point of call, crossing the wire on cruise control under jockey Jose Ortiz in a final time of 58.05 seconds for the five-furlong sprint.

“We broke her and had her down at the training center all winter and she seemed special,” said Casse. “I told Mr. Oxley when I breezed her that she gave me chills and that doesn’t happen often.”

Beautiful Memories, a Kentucky homebred, is out of the Sky Mesa broodmare Sky Dreamer who is a half-sister to turf Grade 1-winner Dream Dancing as well as graded stakes-placed Dream Maker.

Beautiful Memories has been training forwardly for Casse, working two bullets at Churchill Downs heading into Thursday, most recently registering a five-furlong drill in 59.20 on July 4.

Casse said he is hoping for another impressive performance from Beautiful Memories on Opening Day at Saratoga.

“You always want to see more than just one time,” said Casse. “She’s come back and trained well and her last two works have been really good. It was not a shock to see her run the way she did first out. We’re hoping for a similar performance, but we’ll let her do the talking.”

Ortiz, who piloted Catherinethegreat to a 2018 Schuylerville victory for Oxley and Casse, will retain the mount aboard Beautiful Memories from post 3.

Casse also sends out Gary Barber’s New York-bred Make Mischief, who won her debut as the favorite in a five-furlong maiden special weight against her Empire State-bred counterparts on June 18 at Belmont.

The bay daughter of Into Mischief tracked two lengths off the pace in her five-furlong career debut and was a bit green in the stretch but had enough to score a half-length triumph.

Bred by Avanti Stable, Make Mischief is out of the Speightstown broodmare Speightful Lady and was purchased for $285,000 from the Fasig-Tipton Saratoga New York-bred Yearling Sale last August.

Casse said he is looking for Make Mischief to step her game up a notch on Thursday.

“She’s a horse we were high on this winter,” Casse said. “I thought her win was good, but I think she’s better than what she showed, at least I’m hoping so. She’ll have to come with a better performance.”

Hall of Fame jockey John Velazquez will attempt a sixth Schuylerville triumph when piloting Make Mischief from the inside post.

Hall of Fame trainer Steve Asmussen will saddle Hopeful Princess, who arrives off a three-quarter length maiden score at Churchill Downs. Owned by Stonestreet Farm, the dark bay filly gave highly regarded freshman stallion Not This Time his first winner when stalking the pace from second, battling down the stretch with a foe and eventually coming out on top while galloping out with authority on May 21 at Churchill, earning a 75 Beyer Speed Figure.

Bred in Kentucky by Elm Tree Farm, Hopeful Princess is out of the More Than Ready broodmare More Than Magic.

Ken and Sarah Ramsey’s Sunny Isle Beach, who will exit post 5 under Irad Ortiz, Jr., will take a big step up in class for trainer Wesley Ward after displaying a victorious late kick on debut for a $75,000 tag on June 6 at Churchill.

The bay daughter of Jimmy Creed broke from the outside, where she laid mid pack early on, was caught seven wide at the top of the stretch but shifted to the inside of rivals down the lead to score a narrow victory.

“When you have a 2-year-old maiden winner you’re halfway mandated to try stakes company so that’s what we’re doing here,” Ward said. “If you hit the board in a graded stakes race that’s enshrined in their pedigree forever. We should be able to come from behind, so we’ll sit back and ask Irad to be a cool-sitter and a go-getter, which is what he is. If there’s a strong pace up front, then here we come.”

Bred in Kentucky by her owners and Dixiana Farm, Sunny Isle Beach is out of the Kitten’s Joy broodmare Kathern’s Kitten.

The Schuylerville is slated as Race 8 on Thursday’s 10-race card, which offers a first post of 1:10 p.m. Eastern. Saratoga Live will present daily television coverage of the 40-day summer meet on FOX Sports and MSG Networks. For the complete Saratoga Live broadcast schedule, and additional programming information, visit https://www.nyra.com/saratoga/racing/tv-schedule.

NYRA Bets is the official wagering platform of Saratoga Race Course, and the best way to bet every race of the 40-day summer meet. Available to horseplayers nationwide, NYRA Bets is currently offering a $200 new member bonus in addition to a host of special weekly offers. The NYRA Bets app is available for download today on iOS and Android at www.NYRABets.com. 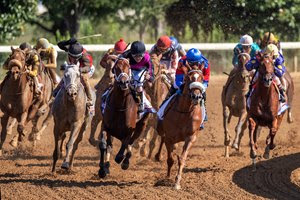