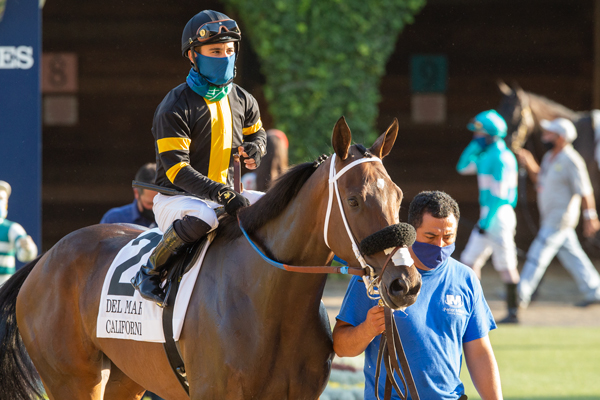 Over the 76 years the race has been run, no more than a handful of fillies have stepped up to take on the boys in the Grade II, $200,000 Del Mar Derby. That was until 2020 – the year that has turned everything and everyone sideways.

This year’s edition of the “Derby” will have not one, not two, but three femmes ready to rock ‘n roll with the guys. The mile and one-eighth out of the track’s diagonal turf chute looks more like a European heat, where the girls take on the boys all the time. It also adds a delicious dimension to a test that is the conclusion of the track’s three-race grass series for sophs, led off by the RunHappy Oceanside Stakes and followed up by the La Jolla Handicap.

The possible favorite in the race, though, appears to be the shipper Pixelate, a colt by City Zip who is in from the east coast to tackle the west coasters and making an appearance at his seventh racetrack in what will be his 11th lifetime start. Pixelate is owned by the powerhouse outfit Godolphin and is trained by the veteran Michael Stidham. He’s run in seven straight grass stakes and has finished in the top three in all of them. Having leading rider Umberto Rispoli in the boot Sunday won’t hurt his chances.

California Kook, a daughter of Boisterous, most recently ran second in the Grade I Del Mar Oaks locally on August 22. She’s been first or second in five of her eight starts for trainer Peter Miller.

Guitty, a French-bred, was a close-up second in the San Clemente on the grass earlier in the meet. The late-running miss works under the watchful eye of the French trainer Leonard Powell.

Warren’s Showtime, bred by his owners, has won five of 12 starts and has banked more than $460,000. She’s a daughter of Clubhouse Ride, who was trained by Craig Lewis, the man who now trains Warren’s Showtime.

The Del Mar Derby will be race No. 10 on the 11-race Sunday program and one of three stakes on the afternoon. First post Sunday is at 1 p.m.