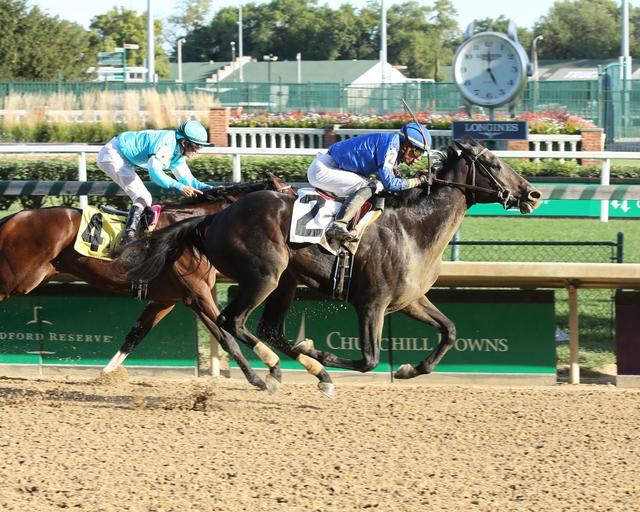 “I feel like all of us have been anticipating his next start since his scratch before the Breeders’ Cup (Juvenile),” trainer Brendan Walsh said. “We always thought that his best races were ahead of him. When he debuted last year I really wasn’t even thinking about the Breeders’ Futurity if he won that race. I had thought that his best races were going to be when he turned 3-years-old or even into next year.”

Maxfield was one of the likely favorites for last year’s $2 million Breeders’ Cup Juvenile (GI) following his $500,000 Breeders’ Futurity (GI) victory but a minor ankle injury forced him to scratch and spend several months on the sidelines. Maxfield shipped back to Walsh’s string of horses in South Florida but once the COVID-19 pandemic struck, he was forced to switch plans for his seasonal bow.

“It would’ve been a little bit unorthodox if we were still prepping for the Derby (on the first Saturday in May),” Walsh said. “We were still going to target the Derby but we would’ve only had one race to get him qualified. Now, we have a couple of races that we can get him ready for the race in September.”

The card includes a trio of Pick 4 and Pick 5 wagers along with the 20-cent Single 6 Jackpot. The late Pick 5 will have a guaranteed pool of $500,000 and feature an all-stakes sequence. Free Brisnet past performances and additional handicapping information will be available at www.churchilldowns.com/handicapping.

Free Brisnet past performances are available at www.churchilldowns.com/handicapping.

Trained by Bret Calhoun and ridden by Gabriel Saez, Mr. Money finished a non-descript seventh in the $1 million Breeders’ Cup Dirt Mile (GI) prior to his sixth-place effort in the $150,000 Oaklawn Mile – his first start as a 4-year-old.

“We are crossing off that race at Oaklawn,” Calhoun said. “I think he’s going to like it a lot better at his home track where he’s run some of his best races in the past.”

Mr. Money was made the 5-1 third choice on the morning line and will break from post No. 13.

The 3-1 morning line favorite in the Blame is Rupp Racing’s three-time Grade III winner Owendale who is set for his return following nearly six months on the sidelines. Trained by Brad Cox, Owendale will cut back in distance to one-turn for the first time since Sept. 2, 2018. Florent Geroux has the call from post 8.

Chief among Dunbar Road’s rivals in the Shawnee is Bradley Thoroughbreds, Tim and Anna Cambron, Denali Stud, Rigney Racing and Madaket Stable’s $500,000 La Troienne (GI) winner She’s a Julie. Trained by Steve Asmussen and ridden by Ricardo Santana Jr., She’s a Julie was made the 2-1 second choice on the morning line odds.

SHARING, ALMS MADE 3-1 CO-FAVORITES IN TEPIN; FIELD PASS 4-1 FAVORITE IN WAR CHANT – Three-year-old turf specialists will be featured Saturday in both the $100,000 Tepin presented by Woodford Reserve and $100,000 War Chant presented by TwinSpires.com.

Sharing, a Maryland-bred daughter of Speightstown, has not been seen since her 1 ¼-length score in the Breeders’ Cup Juvenile Fillies Turf (GI) at Santa Anita. Trained by Graham Motion, Sharing’s only blemish in her four-race career was a narrow third-place effort in her debut. Following the Breeders’ Cup, Sharing was given a break but returned to Motion’s Fair Hill training center in March and has been consistently working toward her sophomore debut.

Alms, trained by Mike Stidham, Alms is a perfect 4-for-4 in her career, including stakes victories in the $150,000 Matron Stakes (GIII), $100,000 Jimmy Durante (GIII) and $60,000 Shantel Lanerie Memorial Overnight Stakes. Paco Lopez will be aboard Alms in the Tepin from post 14

Field Pass, the winner of Turfway Park’s Jeff Ruby Steaks, will shift from the Polytrack surface back to the turf in Saturday’s race. Trained by Mike Maker, Field Pass captured the March 14 Jeff Ruby Steaks by a neck over the Wesley Ward-trained Invader. The 3-year-old son of Lemon Drop Kid returned to Kentucky in February following his victory in Gulfstream Park’s $100,000 Dania Beach. Jose Ortiz will have the call in the War Chant from post No. 5.

DOWN THE STRETCH – There is a $71,805 carryover in Thursday’s 20-cent Single 6 Jackpot. The sequence will span Races 5-10. … Hall of Fame trainer Bill Mott began Thursday’s card at Churchill Downs eight wins away from 5,000 career victories. He has two scheduled starters today – one at Churchill Downs and one at Gulfstream Park. … Trainer Dale Romans held a seven-win margin over Steve Asmussen in the all-time leading trainer standings 737-730 wins. … “Inside Churchill Downs” will air Friday at 6 p.m. on ESPN 680/105.7. The one-hour horse racing program is hosted by Churchill Downs Racetrack’s Darren Rogers and Kevin Kerstein along with BetAmerica and TwinSpires.com racing analyst Scott Shapiro. Those outside the Louisville area can listen live on www.espnlouisville.com.