Lateral condyle fractures are the No. 1 and No. 2 reasons horses are euthanized on U.K. and U.S. racetracks, respectively.

Wouldn’t it be great to know a horse was about to break a bone before it tragically fractures on the racecourse? For one particular—and common—break, such premonition may now be possible. British researchers have determined that MRI images of bone thickness could provide critical information about fracture risk in the lateral condyle of the third metacarpal bone (MC3)—those that occur on the outer half of the bottom bulbous end of the cannon bone.

These long front leg bones are particularly susceptible to fracture starting from the joint surface within the fetlock. It’s a high-risk fracture area for racehorses—the No. 1 reason horses are euthanized on U.K. racetracks, said Tim Parkin, BSc, BVSc, PhD, Dipl. ECVPH, FHEA, MRCVS, dean of the Division of Equine Clinical Sciences and clinical director of the Weipers Equine Centre in the School of Veterinary Medicine at the University of Glasgow, in Scotland. In the United States, these fractures are the second most common site for catastrophic fracture, just behind fractures of the proximal sesamoid bones.

In their extensive five-year study, Parkin and his fellow researchers investigated 191 MC3 bones from 96 Thoroughbreds that had died or been euthanized while racing in Great Britain. This included 47 horses that had sustained MC3 lateral condylar fractures; the other horses died of cardiovascular failure, spinal injuries, or other causes. The scientists used MRI to measure the depth of dense subchondral bone (which is found below the cartilage and supports the cartilage of the joint surface) in several sites around the lower part of the bone.

They discovered “significant changes” in the lateral condyle’s bony makeup in horses that had sustained fractures at that site. The horses had these bony changes not only in the leg that ended up getting a fracture but also in the opposite leg. In contrast, the horses that had died for other reasons did not show these changes in their bone structure, Parkin said.

The “changes” they referred to—which clearly occurred over time before the accident—concerned the depth of the dense part of the bone, he added. Not all density in a bone is equal, and some parts can be denser while other parts are more porous. Parkin measured how deep down in the leg he could find the dense bone.

“If we imagine a horse standing, then horses with increased bone density spreading deeper from the articular surface—in other words, ‘up’ the bone—would be at greatest risk,” he said. “The increased bone density is an adaptive response to training and exercise, but it might be that it also results in more brittle bone in which, if microcracks appear, full blown fractures may be more likely to propagate.”

The study results suggested that some horses could simply be at greater risk of these kinds of fractures because of genetics or training programs, for example, and that risk would be visible in advance as the horse’s bone composition evolves during training, he said.

Ideally, veterinarians could perform regular MRIs on racehorses to measure the dense bone depth in their lateral condyles, said Parkin. However, that’s neither practical nor affordable for most owners. Researchers are hoping to find ways, such as blood tests, to narrow down which horses are most likely to have these bony changes. However, currently no such prescreening method exists.

Even so, an MRI that looks for dense bone depth in the lateral condyle could be a useful diagnostic tool in a clinical setting with lame or sore racehorses, he added.

The good news is these “changes” are not only useful red flags to prevent catastrophic injuries but are also reversible, Parkin said.

“My view is that this is an adaptive response to exercise that could be reversed with appropriate rest and/or exercise management,” he said.

The study, “Can we use subchondral bone thickness on high-field MR images to identify Thoroughbred racehorses at risk of catastrophic lateral condylar fracture?” will appear in an upcoming issue of the Equine Veterinary Journal. 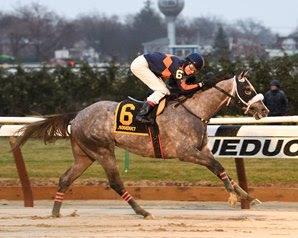