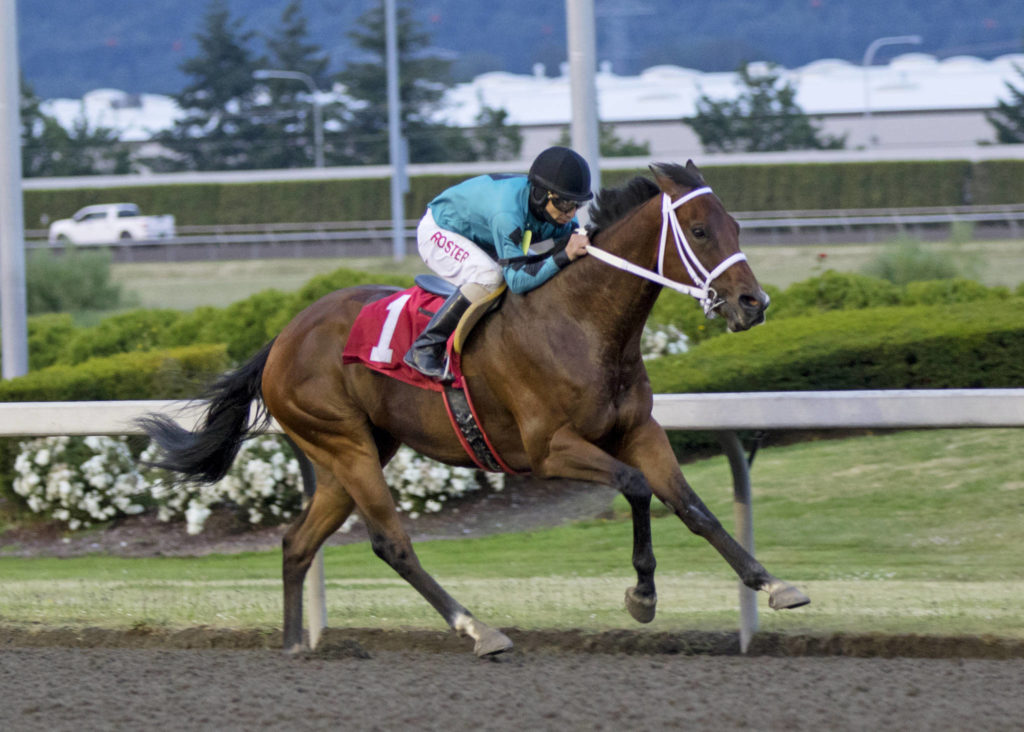 Ridden by Javier Matias, Elliott Bay covered 5 ½ furlongs in a meet-fastest 1:02.99 and paid $7.40 as second choice in the wagering. Frank Lucarelli is the winning trainer for owners Chad and Josh.

Fifth in last year’s Longacres Mile, Elliott Bay had been winless since the 2017 Gottstein Futurity, a span of 15 races that included starts in 11 stakes. Claimed for $50,000 last year, Elliott Bay showed improved speed Thursday, setting pressured fractions of :22.34 and :45.28 for the quarter and half-mile, and poured it on late for the blowout victory.

Muncey, the lone 3-year-old in the race, rallied to finish second while My Grandpa, the 4 to 5 favorite, finished third. Winning Bluff and Hollywood Heat rounded out the order of finish; Lolo Paniolo was scratched earlier in the day. 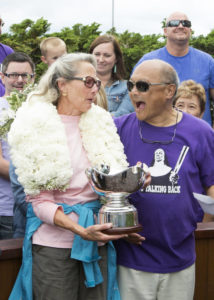 NOTES: Trainer Chris Stenslie had a pair of winners including Daffodil Sweet ($36.80), a Ministers Wildcat filly who dominated by 8 ¾ lengths vs. maiden special weight fillies and mares. . .With the victory on Daffodil Sweet, Juan Gutierrez is now seven wins shy of 2,000 career wins. . .Gary Wales and Alex Cruz rode two winners each on the nine-race card. . .Wales and Gutierrez top the standings with six wins apiece followed by Cruz with five. . .Lucarelli leads the trainers with five wins and has wins on all four cards this season. . .2019 Emerald Downs Horse of the Meeting Anyportinastorm is 6 to 5 in Saturday’s $50,000 Oak Tree Sprint at Pleasanton. Kevin Orozco rides for trainer Blaine Wright and owner Peter Redekop. . .Live racing resumes Wednesday, July 8, with first post 2:15 p.m.
–##–

AUBURN, Wash. (July 1, 2020) – Windy Point rallied from just off the pace to grab the lead nearing the quarter pole and pulled away for 1 1/4-length victory in the $18,500 feature race for fillies and mares, 3-year-olds and up. Juan Gutierrez was aboard the Clemans View Farm & Michelle Beaunaux homebred.

NOTES: With a $31,361 Pick 5 carryover heading into today’s races, bettors across the country took their best shot betting an impressive $297,981 on the sequence. The winning combination of 2/3-2-5-6-3 paid $552.00 for $0.50. Of the five winning horses, one was favored and three others went off the second betting choice…Eddie Martinez was the only jockey to double, winning the seventh race aboard Frolic and Detour and the nightcap on Whata Flirt…The latter is owned by the Emerald Racing Club and trained by Sharon Ross. The 5-year-old mare snapped a 25-race losing streak in her first Emerald Downs appearance. She had finished second 12 times…Wednesday’s 10-race handle was $2,172,220…Live racing resumes Thursday, July 2, at 5 p.m. 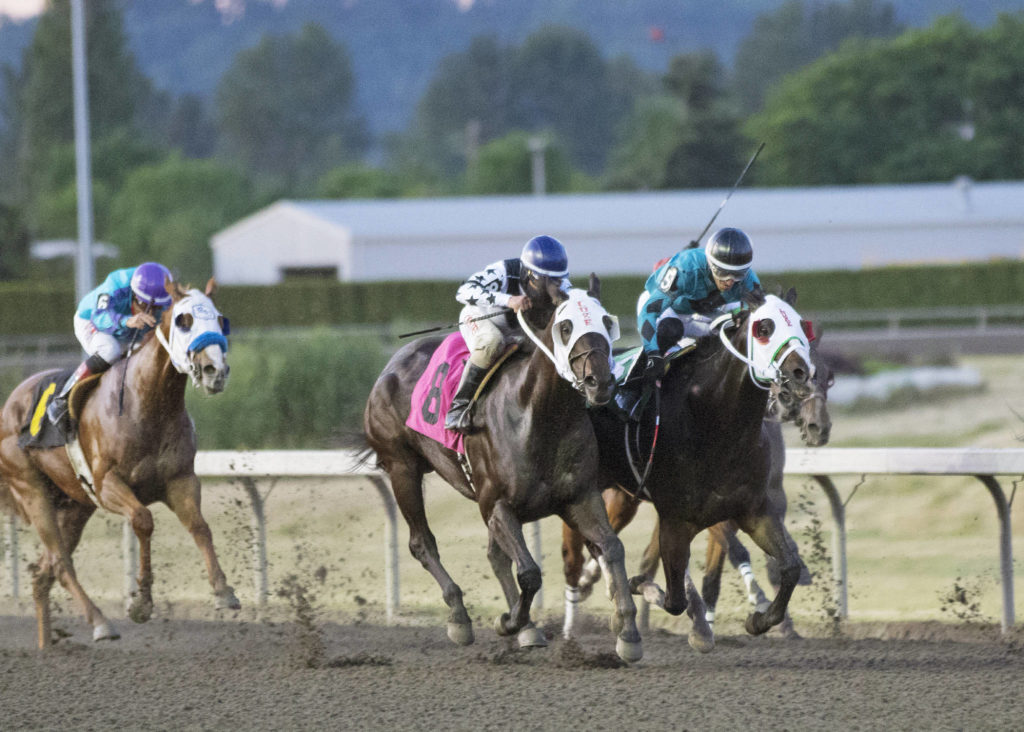 Bullet Drill (left) and Freiburg battle to the wire

Ridden by Javier Matias, Bullet Drill ran 5 ½ furlongs in 1:03.85 and returned $8 as co-second choice in the wagering. A 5-year-old Washington-bred by Coast Guard, Bullet Drill is 4-3-0 in 12 Emerald Downs’ starts with over $55,000 in earnings for William Greenstein of Ashland, Ore.

Freiburg, ridden by Eddie Martinez, rallied in tandem with the winner but came up just short at the wire. Off the board in three starts last winter in Southern California, Freiburg reverted to form Thursday and is 5-3-1 in 17 career starts at Emerald Downs.

Defending training champion Frank Lucarelli saddled both Bullet Drill and Freiburg and already has three wins through the first two days of the meeting.

Grinder Sparksaglo, the 5-2 betting favorite, won the pace duel with Cody’s Choice, setting fractions of 22.13 and :45.10, but was unable to withstand Bullet Drill and Freiburg late and finished third. Washington’s champion older horse of 2019, the now 9-year-old gelding is 15-12-13 in 60 lifetime starts with earnings of $252,337.

Emily’s Gold, The Press, Cody’s Choice and Gray Admiral rounded out the order of finish. Owners’ Prestige was scratched earlier in the day. 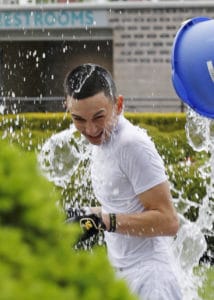 NOTES: Six double digit winners scored victories Thursday led by 23-1 Constant Craving, 19-1 Cate’s Gold and 16-1 Ri’ Pin Snap. The latter two helped create a $31,361 carryover in the $0.50 Pick Five to Wednesday. . .Gary Wales, Lorenzo Lopez and Cerapio Figueroa rode two winners each Thursday. Figueroa, who also had a victory Wednesday, rode here briefly in 2015, scoring his maiden victory aboard Wedding Kake for trainer Chris Stenslie. . .Trainer Bonnie Jenne, fresh off a victory with Makah Lane in the opening day feature, made it two for two at the meet as Full Speed Ahead led gate to wire for a $12.60 upset in the Thursday opener. . .Chris the Beaver ($7) prevailed in the meet’s first 2-year-old event, running 4 ½ furlongs in :53.68 under Figueroa for trainer Jorge Rosales and longtime owner Art McFadden. The winner is a chestnut gelding by Abraaj-Spot On Babe. . .Live racing resumes Wednesday, July 1, at 2:15 p.m.