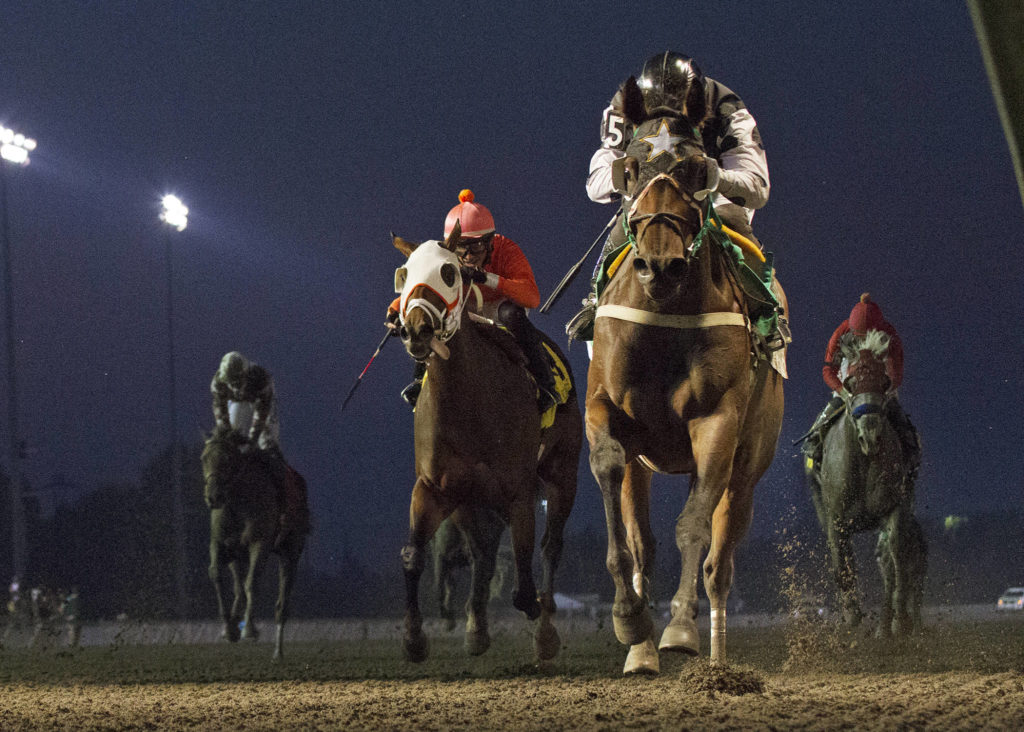 AUBURN, Wash. (January 11) – Emerald Downs has announced a 50-day live racing season in 2021, opening on Wednesday, May 19, and continuing through Thursday, September 23. The 2021 dates were approved during the Washington Horse Racing Commission meeting last week.

Emerald Downs President Phil Ziegler is looking forward to running more race days in 2021, “We were successful running Wednesdays and Thursdays last year,” Ziegler said. “Plus, we are planning to add Sunday racing this year during the summer months.”

The stable area opens for horsemen on Monday, March 1, with training beginning Friday, March 5. The 2021 stakes schedule will be announced next month.

To: Doug Moore, Executive Secretary Washington Horse Racing Commission
From: Phil Ziegler, President Emerald Downs Racing LLC
Dear Doug,
While we usually give our update verbally, we wanted to submit the end of season report in writing.
Despite not having fans at the track, Emerald Downs concluded its 38-day 2020 racing season with record average daily handle. Daily wagering averaged $1,796,475, a 61 percent increase over last year.
We had unprecedented challenges, not only at the track, but in all aspects of our lives. It took the dedication and cooperation of every person involved with Washington racing to prepare for and put on a successful meet. On Wednesday, June 24, horse racing was the first professional sport to return in the state of Washington.
We were open for training when the pandemic began in March and concluded the live season seven and half months later. It is remarkable to report that there were no known COVID cases associated with anyone involved with the race meet.
Good health was not limited to the human participants. Over the 391 races conducted there were zero catastrophic breakdowns from the 2,895 starters.
The racing industry deserves incredible appreciation and recognition for the 2020 season. And while many tracks were closing their stable areas, we had the financial support and dedication from the Muckleshoot Tribe to get us through a period of time without knowing if we would even be permitted to have a live season.
As we look forward to 2021 there is encouraging news of vaccines, which gives us hope of possibly being able to welcome our fans back to the races. It is the plan to open the barn area March 1, begin the season in mid-May and run through sometime in September. We will have an official date request submitted for the January meeting of the WHRC.
2020 Season Timeline
A video review of the 2020 meet may be viewed at: facebook.com/EmeraldDownsRacetrack/videos/1026193957852990/ 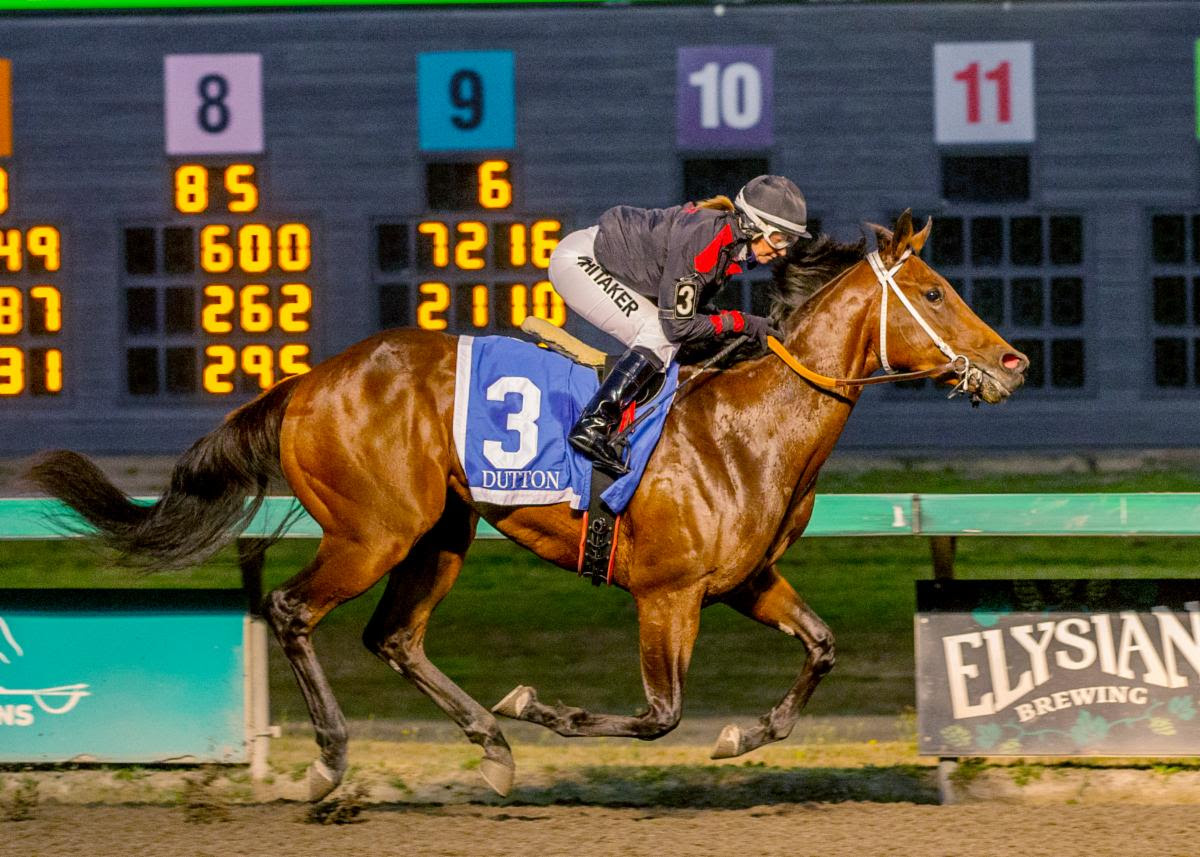 The 37th edition of the Breeders’ Cup World Championships will be held Friday, November 6, and Saturday, November 7, at Keeneland Race Course. This marks the second time that the Lexington, Kentucky, site has presented the marque racing event, which it will again host in 2022.
A total of 184 horses have been entered in the 14 races, in which seven had overflow fields.
Though fans will not be allowed at the track, due to the COVID pandemic, the races continue to feature some of the best runners world-wide.
Future Stars Friday will feature five juvenile races, starting at 11:30 a.m. Pacific Time. The first stakes, the $1-million Juvenile Turf Sprint (G2) will be of special interest to Washingtonians due to Bodenheimer, a Washington-bred son of 2020 leading sire Atta Boy Roy breaking from the number ten spot (of 14). Already a two-time stakes winner of over $140,000, the WTBOA Sale graduate was bred by Larry Romaine out of the stakes-winning A. P. Indy mare Beautiful Daniele, is trained by Valorie Lund and is owned by Lund’s sister Kristin Boice and mother Marylou Holden.
Washington native and Hall of Fame trainer Wesley Ward has three entries in the race – Amanzi Yimpilo (Ire), After Five and Gold Pal – and all three of the also eligibles in Blame the Booze, Gypsy King and Trade Deal.
Ward also has Outadore entered in the $1-million Breeders’ Cup Juvenile (G1), Campanelle (Ire) in the $1-million Breeders’ Cup Juvenile Fillies Turf (G1) and Next in the $2-million Breeders’ Cup Juvenile (G1).
Nine Breeders’ Cup races will be run on Championship Saturday, with the first race (the Breeders’ Cup Filly and Mare Sprint [G1]) scheduled to go off at 9:02 Pacific Time.
Leinster, a half-brother to El Dorado Farms’ stallion Coast Guard and national turf champion male Stormy Liberal, will try to do his part for their catalog page in the $1-million Breeders’ Cup Turf Sprint (G1), a race twice won by Stormy Liberal.
Trainers Mark Glatt, a Spokane native who most recently trained 2019 Longacres Mile (G3) winner Law Abidin Citizen, and Grant Forster, who trained past Emerald Downs champions Youcan’ttakeme and No Giveaway, the latter who won the 2005 Mile, each have a proven runner in the $1-million Breeders’ Cup Dirt Mile (G1). Glatt’s Sharp Samurai will emerge from post position two and the Forster-trained Pirate’s Punch takes his opportunity from the number eight gate.
Glatt also trains Grade 1 winner Collusion Illusion for the partnership pf Washingtonians Dan J. Agnew, Gerald Schneider and John V. Xitco and Oregonian Dr. Rodney E. Orr. The three-year-old colt by Twirling Candy takes to the track in the $2-million Breeders’ Cup Sprint (G1).
To see all the Breeders’ Cup entries go to breederscup.com/contenders. The Breeders’ Cup site also features information on television viewing. 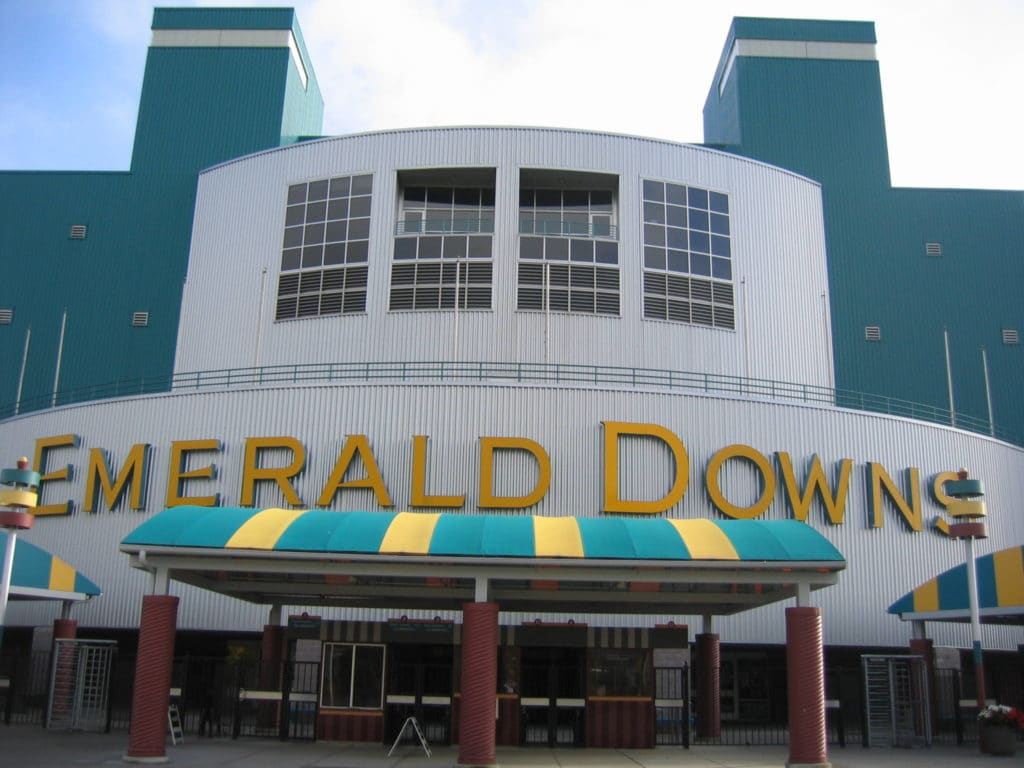 Daily wagering averaged $1,796,475, a 61% increase over last year’s average. Most of the wagering came from internet and mobile site customers located throughout the United States and Canada.

Track president Phil Ziegler reported there were no positive COVID cases, “We want to thank all our stakeholders for working together safely. We had unprecedented challenges not only at the track but in all aspects of our lives. We were the first professional sport to return in the state of Washington and through everyone’s efforts we were able to put on a healthy and successful meet”

Good health was not limited to the human participants. Over the 391 races conducted there were zero catastrophic breakdowns from the 2,895 starters.

On the track accomplishments included trainer Blaine Wright winning his first Longacres Mile with Anothertwistafate, Frank Lucarelli winning his 7th training title with 42 wins and Alex Cruz taking the jockey title with 72 wins in his first season at Emerald Downs.

• Approvals to run live racing (and other professional sports) posted by Governor’s office on June 5.

• Longacres Mile is run on Thursday September 10th marking the first weekday running and the first time run under the lights.

Emerald Downs is located right off Highway 167 in Auburn, WA.

OH MARVELOUS ME CRUZ’S TO VICTORY

Todd and Shawn Hansen’s Oh Marvelous Me rallied smartly down the stretch to prove best in the $23,3000 allowance race. It was the 8-year-olds second consecutive victory in the final month of the season. The winner paid $7.60 to win and covered the 6 furlongs in 1:08.50.

Leading rider Alex Cruz was in the irons. Cruz upped his streak to 25 consecutive racing cards with at least one victory with a five-win day.

The 8/5-betting favorite Papa’s Golden Boy blazed to a huge early lead cutting fractions of :21-1 and :42-4 for the first half mile. Papa’s Golden Boy tired badly in the last furlong to finish last of the six runners.

Cruz set an Emerald Downs record by winning 72 races in the 38-day meeting. The prior best through the first 38 days of a meet was 69 set by Kevin Radke in 2003. 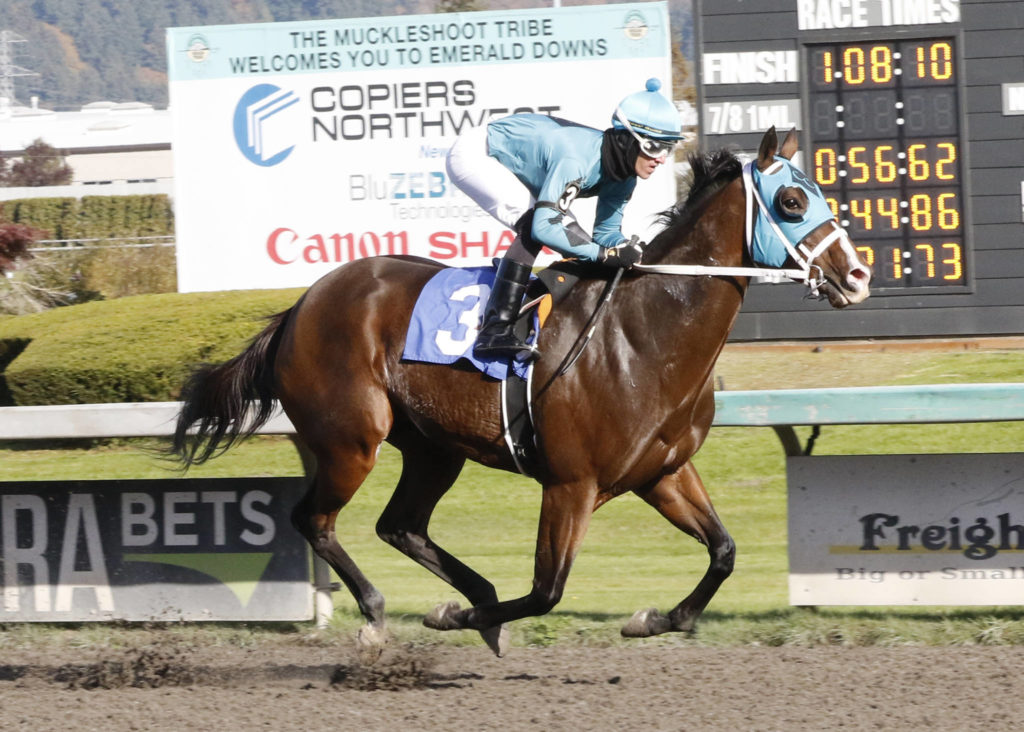 SPOT ON POURS IT ON IN WEDNESDAY FEATURE

Ridden by Eddie Martinez, Spot On ran six furlongs in 1:09.31 on a fast track and paid $7.60 as third choice in the wagering. Frank Lucarelli is the winning trainer for owners Chad Christensen and Josh McKee.

Breaking from the No. 3 post, Spot On dueled with E Z Star Maker through fractions of :21.73 and :44.86, shook clear into the stretch and drew off to win with complete authority.

Lucarelli is the meet’s leading trainer with 42 wins and Christensen and McKee top the owners’ standings with 24 wins.

B C Z Middleton rallied to finish second while Stay in Grace, Suddenly Awesome, Close the Show Lo and E Z Star Maker rounded out the order of finish.

Stay in Grace, the 9-to-5 favorite, was bidding for her third straight win and fourth overall at the meeting. Suddenly Awesome is the younger sister of Spot On.

NOTES: Trainer Manny Ortiz and jockey Leslie Mawing clicked for last to first victories with Purely Political ($4.20) in race two and Check and Raise ($12.60) in race five. . .Alex Cruz and Vince Gibson combined for a victory with Fireball Red ($17.20) in race seven and kept alive their respective winning streaks. Cruz has wins on 24 consecutive racing days while Gibson has saddled at least one winner five straight days. . .Cruz also won aboard Mirror Image ($5.60) in race nine and has clinched the riding title with 67 victories. . .Mawing rode three winners overall and has 17 wins in 11 days since arriving from Minnesota last month. . .Javier Matias and Juan Gutierrez also rode a pair of winners and Gutierrez hit the 50-win mark for the season. . .Live racing continues Thursday with an 11-race card on closing day of the 2020 season, including a $3,330 carryover in the $0.20 Jackpot 7. First post 5 p.m.