MARTIN LUTHER KING DAY IN THE USA ON MONDAY

MOST MAJOR TRACKS ARE OPEN 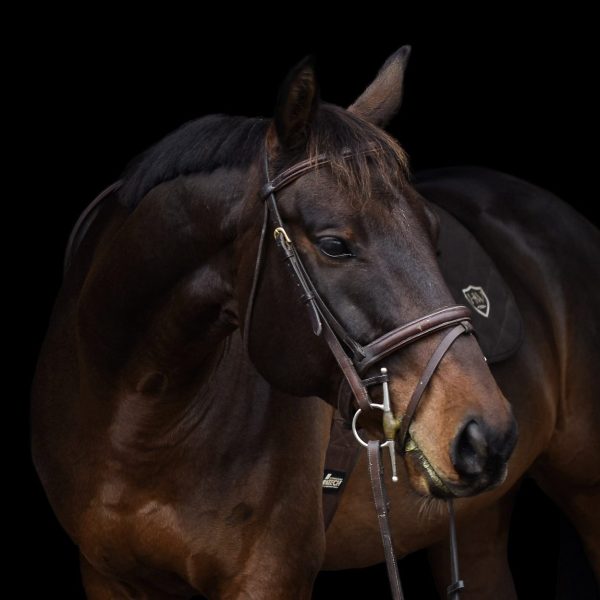 Little Brown Derby only raced as a juvenile, tallying one win and two thirds. The Canadian-bred son of Safely’s Mark retired with earnings of less than $5,000 and made his way to TAA-accredited New Stride Thoroughbred Adoption Society.

Katrina Hamilton was in the market for an off-track Thoroughbred, so she headed to New Stride near Vancouver. It was there she spotted Little Brown Derby, who was being tried by another potential adopter at the time but once she hopped on, his great canter sealed the deal.

Now called “Kato,” the gelding and Hamilton have grown their bond and have competed in the show ring up to three foot at venues such as Milner Downs and Arbutus Meadows.

“My goal with all my horses is to find what they are happiest doing and give them the tools to succeed for anyone to enjoy,” Hamilton said, adding that her mother has taken over Kato’s training and is working with him in dressage, low-level jumping, and equitation.

“Kato will be a lifelong member of our family,” she said. “He has been pleasure ridden by my boyfriend, jumped with juniors, packed me around at show jumping clinics and shows, and now he’s expanding his knowledge in my mom’s disciplines.” 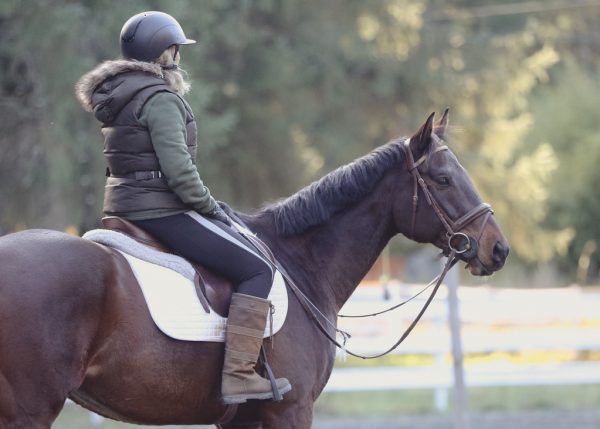 He’s also serving as a model and mascot for Hamilton’s Derby Clothing Company, a British Coumbia-based retailer specializing in everyday equestrian wear. But regardless of his official title, Kato has found a permanent place in Hamilton’s heart and herd.

“Kato was the light in my darkness,” she said. “I adopted him to be a trail horse for myself and my boyfriend when I was no longer enjoying the competition world. He has taught me just as much or more than I have taught him. He was the perfect mascot for my equestrian clothing company, and now he can enjoy his years in my herd of ever changing OTTBs.” 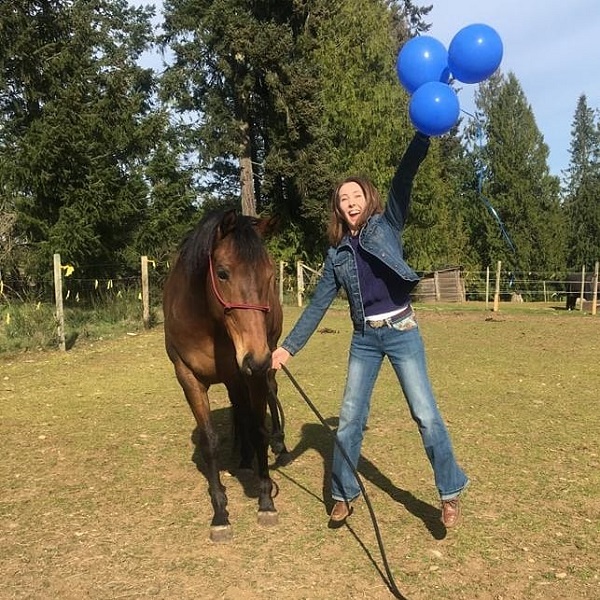 Shadow Dancer ran nine times, earning $11,900 and retiring with a record of 1-1-1. The daughter of Mass Market retired to TAA-accredited New Stride Thoroughbred Adoption Society shortly after her last race in 2018. Shadow Dancer spent nearly a year at British Columbia’s only accredited aftercare facility before being presented to adopter Victoria Parsons.

“I mentioned at the tack store that I was looking for a young horse,” Parsons said. “The owner of the store had adopted a horse from New Stride in the past. I looked at the adoptable horses online, contacted New Stride, sent in an application, then set a day to go try horses. Two of the horses were not yet available for adoption, but I was able to provide references for previous experience with backing young horses so I got to see them. Shadow Dancer was one of the ones not yet available, but I got along with her right away.”

“She was sensitive, light, athletic, and had a willing attitude,” Parsons said. “She was respectful of space but also very friendly and cuddly on the ground. She felt like a horse that would be an athlete and a friend—the type that enjoys having a job and hanging out with you.” 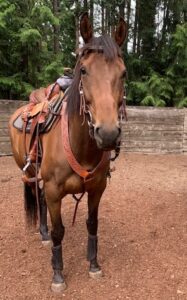 Now, Shadow Dancer, or “Sera,” is excelling in her training and her pragmatic nature continues to shine through. Parsons keeps the British Columbia-bred engaged with a variety of tasks including aspects of natural horsemanship and liberty training.

“‘Sera’ is simple to train- She’s either calm and focused, or she’s ‘up’ and needs things to be slowed down and reapproached,” Parsons said. “Despite being a naturally enthusiastic and athletic horse, she’s never thrown me off. She wants to have a job even if that job is to stand in the arena by the hoola hoop. She’s learned how to ground tie consistently, do pole courses, and has started over fences, goes in western tack, and has started some liberty training as well. We’ve also ponied my gelding a few times and herded the deer a bit if they come into the riding ring. She calls to me when I arrive at the barn, and comes right up to the gate ready to go do things.”

Parsons has big plans for “Sera”, and with a variety of disciplines being added to the mare’s repertoire, it’s clear this pair will shine in and out of the arena.

“Right now we are working on building a solid foundation on the flat, with a goal of showing hunter/jumper,” she said. “I would also like to trail ride her more, compete in a few dressage shows, and either clinic or compete in a few western events. I’d love to try working cows on her as well, and maybe try barrel racing if she likes it.” $5000 GUARANTEED TO THE WINNER

YOUR SELECTIONS MUST BE IN BY 10:00AM FRIDAY, MORNING UNTIL FURTHER NOTICE DUE TO COVID 19 $5000 GUARANTEED TO THE WINNER

YOUR SELECTIONS MUST BE IN BY 10:00AM SATURDAY MORNING

CONTEST IS BASED ON RACES 1-10

December 23, 2020 – Toronto, ON – Great Canadian Gaming Corporation (TSX:GC) (“Great Canadian” or the “Company”) today announced that at the virtual special meeting (the “Meeting”) of shareholders and optionholders of the Company (together, the “Securityholders”) held today, Securityholders voted in favour of a special resolution to approve the plan of arrangement under section 288 of the Business Corporations Act (British Columbia), pursuant to which Raptor Acquisition Corp. (the “Purchaser”), an affiliate of funds managed by affiliates of Apollo Global Management, Inc. (NYSE: APO) (together with its subsidiaries, “Apollo”) will acquire all the issued and outstanding common shares of the Company (the “Shares”) for C$45.00 in cash per Share (the “Arrangement”). The Jockey Club of Canada is now accepting submissions for the 2020 Media Category Awards for Outstanding Writing, Photograph and Digital Audio/Visual and Broadcast.

Submissions must be received by The Jockey Club of Canada office via email before 11:59 p.m. EST December 31, 2020. Please note, submissions received after this deadline will not be accepted.

To qualify for a 2020 Sovereign Award, the submissions must have appeared in a recognized public medium for the first time between the dates of January 1, 2020 and December 31, 2020.

The three categories in which to enter submissions for the media portion of the annual Sovereign Awards are:

Submissions must be received by The Jockey Club of Canada office by email no later than December 31, 2020 by 11:59 p.m. (EST). Submissions received after the deadline will not be accepted.